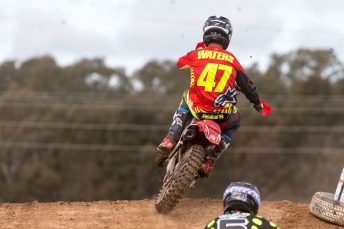 Round seven of the 2017 MX Nationals series proved to be a modest day for Crankt Protein Honda Racing, with riders Todd Waters and Luke Clout finishing up in the top five and top 10 respectively.

Queensland’s Waters qualified for Super Pole, lodging the third fastest time of 1m33.606s, while Clout narrowly missed out on the session to be credited sixth gate pick for the two motos.

In race one the Honda duo found themselves within the top five, with Clout positioned as high as fourth following a healthy start, before a mistake derailed his plans and relegated him down the field.

Waters negotiated the challenging and demanding conditions to place himself in fifth, concluding the moto as the highest CRF450R-mounted finisher. MX1 rookie Clout regrouped from his earlier mistake to salvage a hard-fought ninth-place result.

With both Waters and Clout looking to make amends in their second outing, it was New South Welshman Clout who rocketed to another brilliant start aboard his Honda, leading the premier class field in the opening moments of the race.

The youthful talent soon began to drop positions, as Waters dug deep and progressed through the top five, placing himself in the thick of the battle for second with eventual round winner Kirk Gibbs.

The experienced number 47 maintained his placing in the top three, resulting in him falling just two points shy of the podium on the day, as Clout’s 9-6 scorecard credited him eighth overall.

Waters and Clout now sit fourth and seventh in the championship standings as the prestigious MX Nationals heads to Port Macquarie in New South Wales on Sunday, 30 July for the eighth stop of the series.