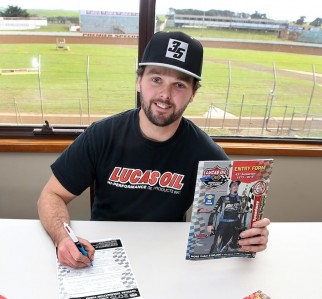 Veal, who is from Warrnambool, won the opening night of the 2014 Lucas Oil Sprintcar Classic and finished third behind American Tim Keading and Max Dumesny in the 35 lap final.

The 25 year-old recently returned from Ohio Speedweek with a victory at Freemont Speedway and will be a force to be reckoned with at his home event.

Veal says his whole year’s racing revolves around the Classic and having momentum is vital for success at the event.

“The Lucas Oil Classic is my number one priority every year,” Veal said.

“This season we are starting our race program early so we will have plenty of race miles and momentum going into January.”

“I’m pretty comfortable at Sungold Stadium but I’ll have two or three nights under my belt before the first show at home, so I’ll be.”

The three-night Lucas Oil Grand Annual Sprintcar Classic will see Australia’s best Sprintcar teams and drivers as well as a strong contingent of American drivers battle for the $200,000-plus prize pool.