When it comes to Brad Warren, it’s probably easier to name the speedway classes that he hasn’t raced in rather than the ones he has, and that is what makes him arguably one of Australian speedway’s most versatile racers.

Competing in speedway across a range of classes for so far two thirds of his life, Warren has contested in some Australian speedway’s biggest events like, Warrnambool’s Grand Annual Classic for 410 Sprintcars, King’s Royal at Kingaroy Speedway for Modified Sedans, Alexandra Speedway’s 100 lap Derby and 3 Hour Enduro races. As well as countless national and state titles across many classes, he continues to contest in many grassroots classes, National and State based, Street Stocks, Wingless Sprints, VSC Sprintcars, Sports Sedans, Standard Saloons and his beloved Crash ‘N’ Bash. 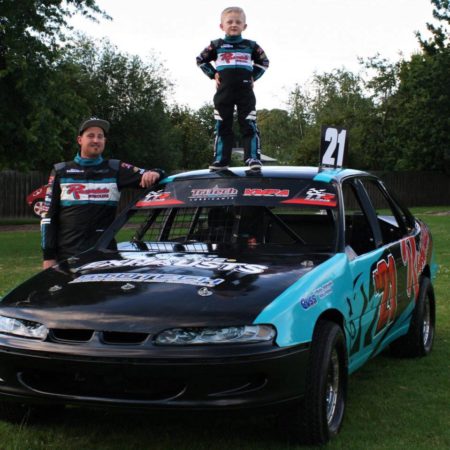 With speedway in his blood, after his dad Paul, who is known as G Dad, raced throughout the 1980s and 1990s in B Grade Sedans (now 3 Litre Sedans and Production Sedans), Street Stocks and Bumper Cars, where he claimed a pair of Victorian Title wins and a pair of minor podium place finishes. It goes without saying, the Warren kids were always going to try their hand at some point in those classes.

Being raised in the south-western Victorian country town of Terang, it was natural that Warren had the desire to get behind the wheel of a speedway car as early possible, which turned out to be 10 years old and the Junior Sedan class was the answer, and a Mini was the weapon of choice.

Following a successful period in Junior Sedans, Warren had his first taste of senior speedway competition in the newly formed class of NOS Sprints, which later become known as Wingless Sprints, with help from mentor and Sprintcar veteran Phil Johnson, he was on the pace from the outset during the 2007-08 season and it didn’t take too long to get on the pace by winning the inaugural Gold Cup 50 Lapper at Laang Speedway. Warren’s highlight in his second season was without a doubt his second-place finish in the first ever running of the Australian NOS Sprint Title at Premier Speedway.

From a young age, Warren always had his eyes on the Sprintcar class, and in the 2012-13 season, that dream was realised, which also saw himself and partner Jessie make the move to Pakenham in the Gippsland region of Melbourne to team up with Daniel Mayson and together put together a 410 Sprintcar team to compete in the entire Eureka Garages & Sheds Series. At the same time, he took up a job in the mechanical side of long-time friend and keen sedan racer Russell Hill from Ramsdale Wreckers and Mechanical Repairs.

Thanks to an opportunity provided to him by Mayson, Warren stepped into 410 Sprintcars on a full-time basis. Although This was not his first time behind the wheel of a Sprintcar as he wet his feet in the 2009-10 season running a handful of race meetings for family friend Craig Burleigh in the Vic # 58 car, until Craig’s daughter Rhiannon Burleigh was old enough to step in.

After an impressive debut season with Mayson and exceeding expectations by coming away with a top-10 finish in the final Eureka Garages & Sheds Series point standings the team dissolved at the conclusion of that season. This situation left Warren in limbo with the next step, and he then spent the next three months putting his own family deal together, where he would lease an engine from Victory Lane Racegear on three occasions. After purchasing that engine Warren put plans in place to contest a full Eureka Garages & Sheds Series schedule with their little family team and managed to grab another top 10 in the point standings that season with a seventh-place finish.

From there, he joined the Bruce Stephens Racing team for what was his final three seasons in Sprintcars. Basing himself in Victoria, Warren contested in four Grand Annual Sprintcar Classic weekends, making the preliminary feature races on two occasions along with selected Eureka Garages & Sheds Series rounds. One of the highlights during his time in Sprintcars was his hard-charging effort during the 2014-15 season in his family run Vic # 54 car at Geelong’s Avalon Raceway on Boxing Night, when he charged from the back of the B-main to qualify into the feature race and then in the feature race came from the back of the field again to collect a sensational third-place finish on the podium. Boxing night was warren’s night of nights, where he also put the BSR Vic # 91 car on the podium in the first night the team ran together with the JSR 410 engine package. Another highlight for Warren came in the 2015-16 season Australian 360 Sprintcar Championship at Mount Gambier’s Borderline Speedway (SA), where he finished in eighth. Also learning the hard lessons along the way, with bent wings, broken differentials, blown engines and concrete fences at 8500rpm.

During his six seasons of Sprintcar racing, Warren has never forgotten his roots, where he raced in Street Stocks, Standard Saloons and Crash ‘N’ Bash classes. One event that Warren make a special effort to run is the Hanno Memorial in Street Stocks, and last season he was on track to win this event in a car loaned to him by Eugene Bennett, so Brad could honour his good mate but when a plug lead dislodged it denied him of the win. For the 2012 running of the Hanno Memorial, Paul ‘G-Dad’ Warren came out of retirement to contest the event alongside Brad.

Over the past two seasons, Warren has raced in the highly competitive Modified Sedan class for Russell Hill and his Ramsdale Wreckers Racing team. This is where his main sights are set to compete moving forward, he is currently building two of his own cars a BF Ford Falcon and a Valiant Charger for all the old school fans out there. In saying that, he loves going back to the Crash ‘N’ Bash class at any given opportunity. A regular front-running contender at the annual Alexandra 100 Lapper event, Warren has finished second on three occasions to a Super Sedan. On those three occasions, he has been the first mono constructed car across the finish line and only car left on the lead lap in a LS1 powered VS Holden Commodore built with his mates at Miller Motorsport. He also teamed up with Luke Fallon to win the 2017 Alexandra 3 Hour Enduro. It’s also interesting to note that Warren has won two Demolition Derbies on the one weekend using the same car, which once again consolidates his versatile driver status.

Warren, who is known as a knockabout type of bloke, loves nothing more than racing speedway with his family and the crew.

“I don’t really care what the class is, I’ll have a crack at it, as I love the challenge of racing speedway and what each individual class brings to the table,” said the now 30-year-old father of two.

“Speedway is in my family’s blood, and the best part about this sport is that we all get to do it together but the reality is, I would of never had the opportunities if it wasn’t for family, team partners, sponsors, car owners, and mates and crew over the years that help me keep up the maintenance on the cars and help empty the shed fridge every couple of days (Ha ha!) and their wives and girlfriends for letting me take up most of their time. Most of all, I can’t thank my wife Jess and our two kids Zeke and Lacey for everything they sacrifice to let me do what I do.”

How does the term versatile racer sit with Warren?

“Ahhh…I’m just a kid that’s got old that’s lucky enough to have something as good as this sport around to let me keep pretending I’m young every weekend,” he replied.

“I’m very thankful for all of the opportunities to experience a wide range of classes, and it’s all of that experience that helps me out on the track.”

With speedway running through the blood of the Warren family, there are also Brad’s three siblings: Jake ‘Plugger’ who is currently in his third season in Wingless Sprints after graduating from Junior Sedans and then there are Ben and Tori, who run in the Crash ‘N’ Bash class on a part-time basis, have also spent time in Junior Sedans. Then there is G-Dad and his wife Judy, who has spent some time racing in the Bumper Car class and also been a brave passenger on a few occasions in Crash ‘N’ Bash events with a few of the kids, trying to keep all the kids in line. And… it doesn’t stop there, with Brad and his wife Jess’s young boy Zeke recently stepped into Junior Quarter Midgets.

It’s fair to say that the Warren family are part of the speedway fabric in the state of Victoria and that certainly doesn’t look like changing anytime soon.