Warren and Fallon win their first Speedway Enduro at Alexandra

Warren and Fallon win their first Speedway Enduro at Alexandra 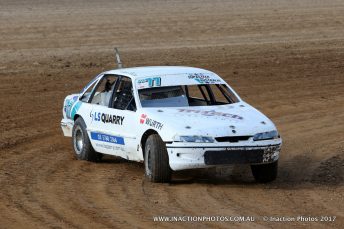 The annual Alexandra Speedway 3 Hour Enduro has been run and won by local Alexandra man Luke Fallon and his team mate from Garfield Brad Warren, the team had looked well on their way to a win with 13 minutes to go before a flat tyre meant Warren had to relinquish a 1o second lead and return to the pits to hand over the Fallon to finish off the job from behind.

The day had everything, fast times, big tip ins, huge rollovers and controversies however the event will remembered for coming down to a handful of teams in the final minutes and a dog leg passing move after the last caution from Fallon on Damien Miller to snatch back the lead and the win.

Earlier Tim McPherson and his team mate Warrick Howie were amongst the stars in the Blackburn Trailers supported tip in competition where Howie finished third, Brendan Miller second and McPherson took out the big win, the competition thrilled the crowd during the heat racing.

Anthony Bellman rolled over his Commodore and fixed it up enough to come out on the track with a car that looked like the Gremlin vehicle that has to be one of the most horrible looking road cars ever!

Wayne Alberni got tangled up and his Commodore hit the concrete hard and needs a re-shell, Daniel Kettels had a huge rollover and a team that finished the race in the top ten for some reason disappeared from results and are trying to get things sorted.

Leaders through the big three hour journey included Lennie Bonnici the new 100 Lap Derby King, Lenny Bates who ran 130 plus laps from the start of the race before he pitted to give his team mate track time, Damien Miller and Brad Warren.

Numerous caution periods later in the race assisted drivers to make it back on track on the lead lap without losing laps on the leaders and it kept the race tight at the end, when Warren who was leading with Bates, Miller and Matt Stampfli right behind pulled out with a flat tyre and when it all looked lost a caution light meant that his team mate could make it on track on the same lap and in such a quick change over, he made it only a few positions on track behind the leader.

An exciting finish through the dog leg section had Fallon on Millers tail and a couple laps from the finish Fallon in a Miller built race car took the lead and went on to take a popular win with Warren over the brothers Damien and Brendan Miler then Steve Kershaw and Stampfli, Andrew Jordan and Bates and rounding out the top five Shane O’Brien and Bonnici.

Amongst the top ten finishes were all female team Belinda McCoubrie and Felicity Roycroft and Anthony Bellman with his smashed up car and his team mate Peter Cox who had never met until they turned up at the track earlier that day.

After the race in celebration Fallon and Warren were of course both complimentary of each other having never been team mates before, they have locked in their combination to do it again next season and try to defend the win.

Warren who runs Sprintcars (the formula one of Speedway) in his regular season was stoked with the result. “I couldn’t have had a better team mate, Luke is just a smooth driver, quick and smart, he saves his tyres and doesn’t lose time laps on the leaders, when he had to jump back on track I knew we would at least secure the top three, watching him get passed Miller just blew me away, what a great feeling this is.” Shared Warren.

Likewise Fallon was pleased with his first Enduro win after having already won the 100 Lap Derby four times. “During the tough part of the race Brad kept us right up there and it made my role easier when I came out on track. When he got to the front and started to distance the field, I was certain we were on the way to a win, things though change quickly and I had to pull myself together and come out and see what I could do. The result just boggles me, How did we do it, I will always remember this night I can tell you.”

Qualifying racing earlier had two teams with two wins putting them onto the front row of the field. Miller and Miller and Bates and Jordan, on fastest laps the Millers started on pole position. The fastest ten lap race time in heats was 5 minutes 33.667 by Brendan Miller in the very last heat.

Alexandra now return for racing in October with a huge season planned, information is updated on the club website and you can follow the club on facebook.