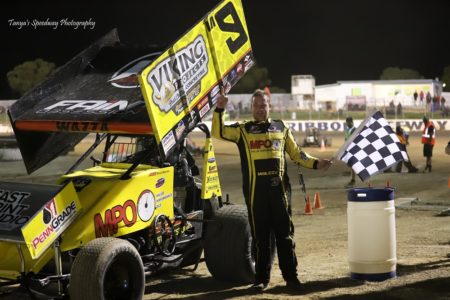 This past weekend one of the premier entertainment venues in the Wimmera in Blue Ribbon Raceway entertained motorsport fans and enthusiasts with the latest round of the All Star Sprintcars, the Victorian Wingless Sprints Title and some legendary Vintage Sedans. Brad Warren born and raised in the South West of the state nabbed his first major Sprintcar victory in the second round of the All Stars for the season at Blue Ribbon, whilst Portland’s Luke Storer won the Victorian Wingless Sprint title defeating fifty others across the evening to claim the major result.

The Sprintcars began their evening with their timed lap qualifying with Charles Hunter from the Bacchus Marsh area of Victoria heading South Australian Mark Caruso, another west of Melbourne youngster Jordyn Charge, veteran racer Phil Lock and Supercar star Cameron Waters. The timed laps helped with race start position for the qualifiers of which four were held with Hunter winning the first by a small.254 of a second margin over Todd Moule. Warren from row two then picked off Lock and Caruso in the second to win that qualifier before finishing second behind Hayden Pitt from South Australia in the third. Finally Australian Summernats ‘Burnout King’ Steven Loader won the fourth qualifier as he peddled his Sprintcar to a win over the second man ever to compete in one hundred rounds of All Star Sprintcars, Paul Solomon.

The feature event field lined up with Warren and Caruso, Todd Hobson, Solomon, David Donegan, Waters, Hunter, Moule, Jeremy Kupsch and Brendan Guerin the top ten starters. Solomon started terrifically well slotting in behind Warren on lap one of thirty before a tangle back behind the leaders finished with series leader Charles Hunter sustaining considerable damage to his race car resulting in him watching from the infield from lap four.

Caruso picked back a spot from Solomon and set about reeling in Warren who had skipped out a little so that he could hassle him for the lead. On lap thirteen in the midst of traffic, Caruso made an excellent choice and slid on past Warren to lead, however that position was short lived as Warren got right back past on the next circulation of Blue-Ribbon Raceway.

With very little changes of position for the next seventeen laps, Warren went on to a popular victory for his Mildura based car owners and crew and plenty of Wimmera and South West Victorian race fans who had watched him from a boy in Junior Sedans to now being an adult in the Formula 1 class of Speedway, the Sprintcars. Warren beat Caruso, Solomon, Waters and Hobson to claim his first major Sprintcar win.

“It has been years of developing, learning, trying from myself and support from my family Paul, Judy, Jake, Ben, Tori and Jess and the kids. To Paul McClure and the team thank you for believing in me with this opportunity this season and for everything you do. Congratulations to Mark and Paul on their results. This feels unbelievable after all the toiling, I will never forget this night, that is for sure.” Shared Warren after the win.
Wingless Sprints filled the pit enclosure with fifty race drivers keen to leave with the number one adorned on their fuel tank for the coming twelve months. Numerous competitors were in with a serious shot of a podium place result including Wimmera locals Steven Hateley and Jeremy Beddison.

Fifteen qualifiers were held to determine to last chance qualifiers fields and the Victorian title line-up. South Australian Jack McCarthy took the first win of the night in round one followed by Travis Millar, Kirby Hillyer another South Australian, Luke Storer, and defending champion Alex Ross.

In the second round Chris Halesworth began with a win, McCarthy doubled up for his second win, Luke Weel, New South Welshman Coby Elliott, and Blake Walsh also won. Starting off round three Storer won his second qualifier, Tyson Martin, Beddison, Hateley and Harry Ross also all won for the first time during the night.

Wayne Logue and Matthew Symons along with Mick Rigby and Geoff Cook all qualified into the title via the last chance qualifiers whilst Tony Moule rued directly missing the title race after a front left tyre flat in his third qualifier impeded him and he was passed on the final lap final turn by Hateley finishing second and out of the automatic top sixteen title race qualifiers, which relegated him back to the final qualifiers where he missed a top two transfer spot.

For the thirty-lap title race Storer, Millar, Martin, Alex Ross, McCarthy, Blake Walsh, Hobson, Harry Ross, Hateley and Beddison were the top ten starts in a field of twenty with claims on the number one prize. Lap one was not good for Millar and Martin as they slid back behind Storer, Alex Ross and McCarthy and got even worse for Millar who was back to sixth by lap five.

At lap ten every racer was still on track and Storer had a handy lead well in front of Alex Ross, McCarthy, Martin, and Hobson. A crash on lap thirteen eliminated Hobson from the chase and he let his feelings known towards Millar, as he marched across the infield and entered into a discussion with him. On the next attempted start Carly Walsh had a rollover in turn three and four and her race was done, and Harry Ross pulled infield with mechanical issues also.

After the title event Storer of course was delighted to win. “Thank you to dad (Bill) and the whole team for their efforts each and every week and especially tonight. We have great supporters of our racing, and we cannot thank them enough. Congratulations to the other podium placers and thank you to our volunteers and officials at Wingless Sprints Victoria and here at Blue Ribbon Raceway.” Said Storer.

Racing returns to Blue Ribbon Raceway on March the 5th with the popular Super Rods and Formula 500 series events plus Limited Sportsman and Compact Speedcars in an open wheel night event.