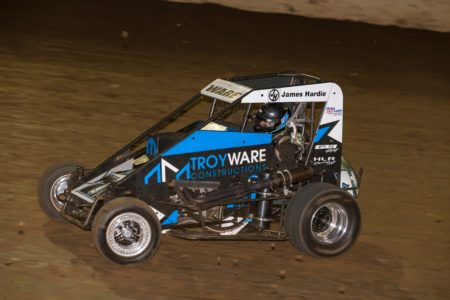 After spending last season on the sidelines and running a limited campaign so far this season, Troy Ware last Saturday night returned to Toowoomba’s Hi-Tec Oils Speedway for the Speedcar feature-race winner’s circle.

Due to work commitments and spending time developing the Mopar engine aboard his Qld # 71 Troy Ware Constructions supported Spike car, Ware has spent some time on the sidelines, but he is now is looking forward to finishing the 2019-20 season on a strong note.

Last Saturday night was only Ware’s third appearance of the season and it was a case of third time lucky, after he hit his straps during the 20-lap feature race, where he had moved from position three to hit the lead on lap five. Once out in front, Ware managed to control the pace and went on to score a solid victory.

“It was a great feeling to get back into victory lane and it (this win) has given me a massive confidence boost for the rest of the season,” Ware expressed, who at his previous race meeting at Archerfield Speedway was denied of the feature-race win due to a deflating tyre while leading and going on to finish in second.

“My team and our engine builder Keith Hussey have been working hard on developing our Mopar engine in order to improve its performance and stay competitive with the front runners.”

Ware’s win couldn’t have come at a better time, as this weekend, he heads down to Warrnambool’s Premier Speedway in Victoria to contest this Friday and Saturday night’s Australian Speedcar Championship.

“With my car and engine package working currently really well, I’ve set my weekend goal to be a top-10 runner,” Ware said, whose only previous Premier Speedway was during the Victorian Title of the 2017-18 season, when he charged from the back of the field (position 20) to narrowly miss out on a podium finish in fourth.

“With last weekend’s win and my previous Premier Speedway visit, I’m really looking forward to this weekend’s Australian Championship and my confidence is high.”

Ware would also like to thank his wife Cora and their two kids: Kayla and Madison, along with his crew chief Andrew Young and crew member Steve Chapman.

To find out more about Ware and his team, LIKE them on Facebook by searching Ware Motorsports.