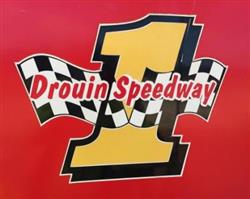 After a rain cancellation last Sunday, this Sunday morning Drouin Speedway will try once again to host the Crash and Bash Association in a packed and picturesque venue to enjoy the smash spin them, crash them and bash them style of the feature class, sometimes a car is crashed and bash and upside down even before the race starts!

Over twenty-five competitors in the open class Crash and Bash will do battle in the War on Wheels with last weekend’s nominations standing except for some minor tweaks to the entry list. Expect Jason Judd, Brad Warren, Craig McKendry, and best mates Andrew Corlett and James Kane to figure in the action.

It is always difficult to choose a winner in the class as anything goes, however one thing is for sure, the driver who is the smartest tactically will come out on top. Expect cars to hit tyres, concrete, each other and let’s just hope they avoid the ambulance!

The Crash and Bash girls will also be at it on ‘Drive for Yarnie’ race day with Lea Judd who recently won at Daylesford the favourite going into Sunday. The likes of Sarah Price, Kellie Latham, and Bianca Brown amongst her competition, are keen to take victory from her on Sunday.

The Junior Standard Saloon competitors will be back to finish off their ‘Melbourne IT Support’ feature event final from the previous race meeting, the Junior Jam. After that is over, they will compete in Sunday’s racing with the likes of Jack Yeoman’s, Harry and Owen Cecil, Nathan and Maddison Miles, Linken Paterson, Cody Drennan and Hunter Carey all competing. Harry Cecil is on pole position for the Junior Jam as top qualifier and Jack Yeoman’s in his last season of seniors will be keen to win as his Junior career winds up.

Standard Saloons have almost thirty competitors continuing the run of incredible Sunday family day race fields they have been producing at Drouin. Jeff Blencowe, Leigh Gooding, Daniel Walkinshaw, Col Yeomans, Andrew Cormack, and Darwyn Lee are just some of the racers that could figure in the run to the chequered flag.

Ladies Standard Saloon action is also on the schedule. Sharlene Laidlaw, Kate Stuchbery and Rebecca Glassborow are some of the drivers who will be keen to chalk up victory. They will have to try and get the better of back to back Victorian champion Trish Dike and Sarah Price a entertaining hard charger behind the wheel.