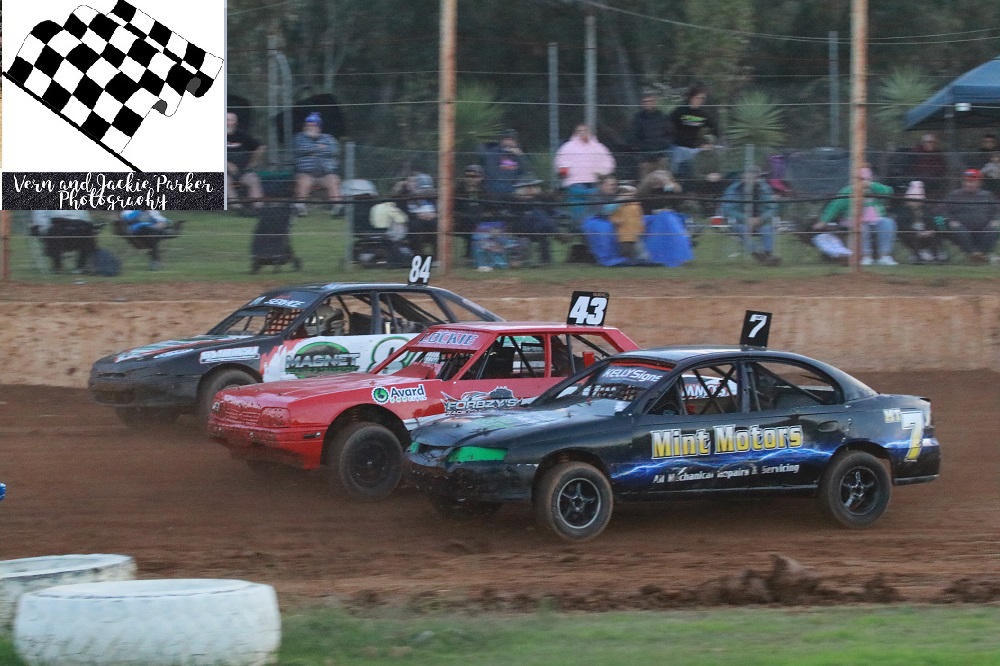 Wangaratta City Raceway is finished for another season with many featured events and series rounds providing terrific entertainment this past Saturday night for the final time until November. The biggest winner of them all was Wangaratta club member Felicity Roycroft who finished second in the major event Sports Sedan Darren Levy Memorial round three final, won the Ladies Open Sedan annual feature event and won the final overall Darren Levy Memorial for Sports Sedans finishing on to after the three rounds .

Around thirty Sports Sedans attended for the final ever Darren Levy Memorial event with drivers from the Alexandra winning the first four of nine qualifying races, Ian Thomsen, Russell Smith and his son Dale and then Josh Service won before Mount Beauty racer Tom McDonald got the north east on the board. Matt Ismail and Luke Fallon from Alexandra won the next two before Goulburn Valley racer Jack Houlahan won the second last and Wangaratta member Nathan Shortis the final qualifier.

In the thirty-lap finale, Dale Smith led the first lap from Thomsen, Shortis, McDonald and Fallon. Fallon moved quickly to third by lap two before a race incident on lap three changed up the leaders pack with Thomsen in front of Smith, Shortis, Jamie Lock and Houlahan.

Lock moved to the lead on lap nine with Thomsen second, Houlahan into third in front of Roycroft and Brendan Harper. Wangaratta member driver Josh Beattie moved to fifth on lap fourteen with sixteen laps still to go. With ten laps to go Lock was leading Houlahan, Thomsen, Roycroft and Seymour racer Dennis Reid. At the chequered flag, Jamie Lock finished seven seconds in front of Roycroft for the victory with Thomsen six seconds further back. Jamie’s father Rob Lock finished in fourth with Reid in fifth spot.

In the final overall positions for the three race Darren Levy Memorial, Felicity Roycroft won from Josh Service and Jay Nicolaisen. Roycroft is the final ever winner of the series.

Junior Open Sedans featured in their state series and the Victorian champion for the class Dylan Barrow from Wandin won all three of his qualifying races leading up to the feature event. Jacob Tinworth from the Hamilton Speedway club won one and Connor Claridge from Bendigo won two.

Barrow then led every lap in the final to pick up another victory ahead of Tinworth, Marty Bassett from the Corowa – Rutherglen club, Marcus Maclean and Mackenzie Bunt also both from the nearby Corowa club. Claridge, who would have kept Barrow honest at the front, exited the feature race early.

The visiting Grand Prix Midget club competed in a round of their season long Masters Series and Ashley Booker had a clean sweep night winning all three-heat races and then the feature event after starting rear of field. Booker defeated Wangaratta club member Shawn Ward who had led the first seven laps of the final before Booker passed by him. Terry Brown finished in third, Matt Kamolins and Paul Perry rounded out the top five.

Wayne Sheerman from Melbourne’s eastern suburbs won all three of the Standard Saloon heat races and then took the win in the final from Micheal Fleming-Robertson and Wangaratta member Trevor Evans.

Visiting competitors in the Junior 1200cc Sedans class competed for state series round points also. Braiden Webster from Wonthaggi, Riley Taylor and Arthur Hutchinson won heat races on the way to the final where Webster led the first five laps. Hutchinson assumed control of the race from there and went on to win from Webster, Riley Taylor, Ella Sheedy and Holly Hutchinson.

Wangaratta’s annual Ladies Open Sedan racing feature event was also run and won. Felicity Roycroft from the Wangaratta club continued her domination of the Ladies racing for the season winning the feature event after Belinda Chalcraft won one of the qualifiers and she won the two others. Tamsin Cummins led at the start of the feature event from Chalcraft, Roycroft, Kelly Lamb and Jaimi Barber. Roycroft took the lead on lap five and then went on to the victory from Lamb, Barber, Renah Pollard and Kimberly Smith.

That is it for another season from the volunteers and committee of the Wangaratta Speedway Club, they will see you all next season, in the meantime if anybody wishes to become a member of the club for next season, you can make contact now and get the paperwork done.