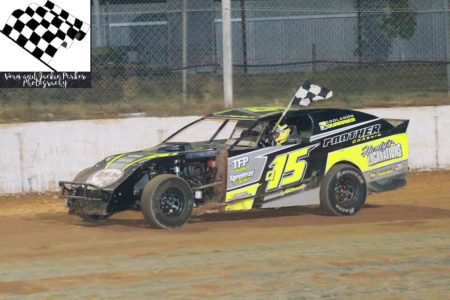 Fans left the Wangaratta City Raceway on Saturday night with happy faces after a terrific night of entertainment that ended when the Demolition Derby closed the season with a Kayn Shmal victory in what is said to be his last ever Demolition Derby, this had followed Matt Hardy from Queensland winning the AMCA Nationals Victorian title and Justin Paull from Melbourne had won the Victorian Compact Speedcar title.

The Amca Nationals had attracted cars from Tasmania, Queensland, and New South Wales to compete with the Victorians in a high-class field of competitors. Ray Kime, Dean Heseltine, Daniel Brooks, Steve Price, Matt Hardy and Neale Peachy all won a qualifying race proving the strength of the class with not one winner earning two victories in qualifying.

In the monster thirty lap final. Hardy began from the front with Kime. Tim Reidy from the second row moved forward into the chasing position at the drop of the green flag before Brooks took that spot before one third race distance. Lots of positional changes back in the pack was entertaining before Hardy secured a win by less than a second after nine minutes of feature race competition. Reidy the first of the Victorians in second then Brooks from Tasmania, Price from Queensland, and Heseltine from Melbourne.

The Compact Speedcars had also attracted interstate competition with New South Wales drivers in line-up to try and keep a hold of the Victorian title that they had secured twelve months ago. Ash Booker, last Wangaratta winner Michael Conway, Justin Paull a former national champion, Mark Heaton the current national champion, Shepparton racer Daniel James and Paull who was the only competitor to double up with qualifying wins rounded out the heat results.

Paull quickly snapped up the lead from Heaton and Conway. Along the race journey drivers such as Sharp, Shaun Robinson and the Hutchinson brothers Mark and David di not finish due to mechanical reasons whilst Paull continued out front with the lead. The top five positions did not change for twenty-four laps until the final lap of the race when Conway was passed by James and lost his third spot as Paull, Heaton, James, Conway, and Cecil rounded out the top five podium.

With important local relevance, the Darren Levy Memorial was held for the Sports Sedans and some drivers from Melbourne had made their way to Wangaratta to compete with keen locals. Wangaratta member Nathan Shortis competed in his recently purchased new car from a Melbourne racer and won all three of his heat races. Joel Copeland, Shane Simpson, and Victorian champion Jamie Paull the Victorian champion won the rest.

Shortis, Chris Fitzgerald a Wangaratta businessman, Paull, Josh Beattie, Simpson, and Copeland lined-up in the top six spots for the thirty-three-lap race to honour Levy’s race number when he competed. Shortis assumed control of the race immediately once it began. Simpson and Paull traded places in the early goings before Paull secured the second spot latter on. In a race of attrition much longer than regular club events, the top cars rose to the top five. Shortis secured the big victory from Paull, Simpson, Martin Heiner, and Fitzgerald.

In Standard Saloon racing Brendon Eames and then Trevor Evans won all three qualifiers between them with Evans picking up two of those wins. Evans ten led the fifteen-lap final from start to finish to lead home Eames, Brendan D’Amico, Anthony Sgroi and Jaimi Barber.

Lastly the Junior Sedans had two classes in competition, the 1200 Juniors and the Junior Sedans for four cylinder and above modified race cars. Marcus Maclean won the latter whilst Bryce Leek, Brock Johnson from Yarrawonga and Arthur Hutchinson were the top three in the 1200s.

Kayn and Codyy Shmal, brothers involved in Demolition Derby’s then were part of the final event where destroying the car that Wangaratta President John Patton was in, was the purpose. Kayn Shmal won and Patton’s car was carrying a few more dint’s than when it hit the race track.

The Club is now putting its focus on other events they can use their facility for until Speedway begins once more.