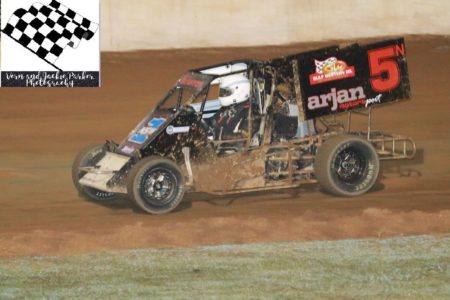 Wangaratta City Raceway and its terrific group of volunteers delivered another superb night of local entertainment for the North East of Victoria with a Victorian title decided for the Grand Prix Midgets and the Standard Saloons competing in a sensational feature for state series points. Wins went the way of Gary Bowyer from Sydney in the Midgets, Wayne Sheerman in the Standard Saloons, Marcus Maclean in Juniors, Arthur Hutchinson also in Juniors, Felicity Roycroft in Ladies Sedans and Sports Sedans and Leeton’s Scott Hawkins in Production Sedans.

The Grand Prix Midgets competed in six qualifying races before their title event with one of Victoria’s strongest Chris Fowler winning the first qualifier by a huge margin. Paul Perry who comes from within the Goulburn Valley won the second qualifier with Goulburn New South Wales’s woman Janelle Saville winning the third. Gary Bowyer was successful in the fourth before Saville became the first competitor to win two qualifying races with Fowler winning the last and joining Saville as double-up winners.

Saville and Fowler began at the front of the field with Perry and another Goulburn Valley racer Terry Brown, Matt Kamolins and Bowyer rounded out the top six starters. Saville led the race from the start with Fowler the first of the big named starters to pull out of the race. Saville led Perry, Bowyer, Kamolins and Brown at lap five. Bowyer moved into second and at lap ten Saville still held the race lead. It was on lap eighteen that Bowyer assumed the front spot from Saville and as the chequered flag dropped on twenty laps, Bowyer had become the third New South Wales driver to ever win the Victorian title with Saville second, Perry, Brown and then Kamolins rounding out the top five.

Some of Victoria’s best Standard Saloon drivers came to Wangaratta for the series round supported locally by Kore Concreting whilst others came to use the opportunity to compete at Wangaratta before next season’s Victorian title at the same venue. Shane Stewart from Morwell, Bradley Hill from Drouin, and Tim Hutchinson from Geelong won the first-round heat qualifiers. Yarrawonga’s Gary Evans then took a win in his Station Wagon; Patrick Vuillermin from Traralgon took a win, as did Wayne Sheerman from Melbourne’s Eastern Suburbs. Steven Dadswell also from Latrobe Valley, Sheerman again and Evans a second time won all the qualifiers.

Sheerman and Gary Evans began at the front of the field with Warrick Howie from Chiltern, Hill, Patrick Vuillermin, and the second of the Evans brothers Trevor started in the front six spots. Sheerman led the race early with Howie the first big name driver to exit the race on lap seven. At lap ten Sheerman was leading Gary Evans, Vuillermin, Hill, and Matt Leek and at lap twenty Sheerman who had led every lap was still out front with Gary Evans, Hill, Leek, and Trevor Evans the top five.

Things went wrong for Gary Evans from there as he dropped through the field and out of the race by lap twenty-four. At the finish line Sheerman after thirty laps took the victory from Hill, Leek, Micheal Fleming – Robertson from Corowa and Shane Stewart.
Felicity Roycroft won the Sports Sedans in front of Josh Beattie, Matt Brooks, and Garry Gapes whilst she also won the Ladies Open Sedans in front of Bianca Ballantyne, Tay Cummins, Dette Miles and Nicole Gapes.

Leeton’s Scott Hawkins won in front of club mate Danny Harrison in the Production Sedan final with Jack Bear from Corowa third in front of Brendan Hawkins whilst Corowa Junior Open Sedan competitor Marcus Maclean won from Riley Balins, Michael Sayers, Jordan Tewkesbury, and Tom Little after he led every lap of twelve in the final.

Rounding out all the racing the visiting Junior 1200cc Sedan’s final was won by Arthur Hutchinson from Werribee in front of Riley Taylor and Wangaratta based racer Bryce Leek. Izac Stephenson finished in fourth in front of Holly Hutchinson.