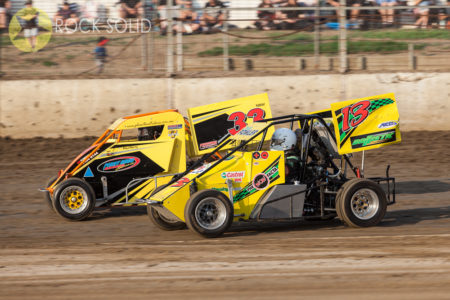 After more than a year away from racing due to the effect the Covid Pandemic has had on the community, Wangaratta City Raceway fires up again this Saturday night with around seventy race drivers set to tear up the newly surfaced track. The Grand Prix Midgets are on hand for their Victorian State title, the Unlimited Sedan’s are visiting for their first time and the Compact Speedcars compete all with support from Wangaratta and the North East’s local heroes.

The hard working volunteers at the club have been preparing for this night for months and many hours of labour have gone in to upgrade the video tower, and Officials and Commentary area, Track entry and exit gates and a complete new track surface.

“Our volunteers have pulled together and people around the community have contributed support through the hours of labour they have been able to offer. Part curly pleasing was our sport’s national governing body supported us with grants and for that we thank them and Liz Weaver who has kept in regular contact with us.” Shared President John Patton.

The Victorian Grand Prix Midget state title is the big showcase event of the night with New South Wales and Victorian competitors set to do battle. In recent seasons Janelle Saville has been at the pointy end of the field in major events and she will be very hard to stop this weekend. Former champion driver of the class Ash Booker returns, and the likes of Chris Fowler, Travis Florrimell, Paul Perry, Alex Myers and Louis Rodriguez are likely to figure in the results.

Compact Speedcar action includes Louis Rodriguez again as he competes in both the open wheel classes, whilst Mark Cecil, Justin Paull and Michael Conway will be front runners and local Wangaratta racer Scott Thomson returns after some time away from the scene.

Wangaratta gets its first look at the popular Unlimited Sedans with Warrick Taylor the Victorian champion heading the nominations. He will have his hands full with Lennie Bonnici, Trent Susol, Peter Cox and Ian Page, whilst drivers from the north east such as Wayne Eames and Corey McDonald cannot wait to do battle at Wangaratta.

Standard Saloon racing has a small yet strong field with Wayne Sheerman in his very quick car from Melbourne up against locals Shane Roycroft, Brendon Eames, Jaimi Barber and Micheal Fleming –Robertson keen to pick off the big win in this tough line-up.

Finally the Junior Sedan field is also another field that will produce outstanding racing for fans. Dylan Barrow, Bradin Claridge and Marty Bassett in particular have strong finishing results across last season and this year behind them, watch to see who wins the battle on Saturday night.

The gates to the public open from Midday and racing begins from 5pm. Public enquiries can be made to 0402 820 489