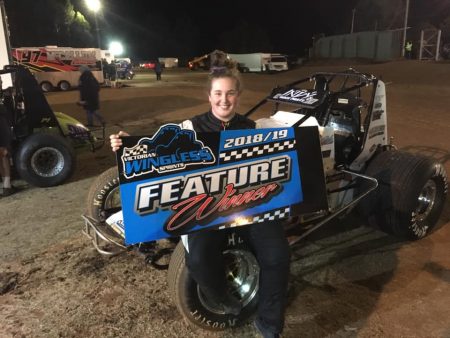 With the inclement weather thankfully holding out for last Saturday night’s fifth Indy Race Parts Super Series round for Wingless Sprints at Hamilton’s Western Speedway, a consistent performance for Carly Walsh saw her drive to her maiden round win during what was an action-packed feature race.

While it was Walsh who outlasted her rivals to claim the chequered flag, it was Travis Millar who gave himself the best possible chance of victory by earning the pole position start for the 20-lap feature race, alongside South Australian visitor Mitchell Broome.

Getting the better of his fellow front-row starter, Millar quickly launched himself into the lead at the drop of the green flag, forcing Broome to sit behind him in second. However, with several cars hitting the wall and going on to make contact with other competitors on the opening lap, a full restart was required, and this time it was Broome who made the most of it.

Following Broome through as he raced into the lead was outside second row starter Daniel Storer, who drove around the outside of Millar to claim the runner-up spot. It was a hairy moment for Millar, who rode the left-rear tyre of Storer, but did well to regain his composure and continue the race.

Becoming embroiled in a great battle through lapped traffic, Broome and Storer raced in close quarters until around halfway through the distance, before Storer ran wide, opening the door for Walsh and Millar to move into the minor podium positions, relegating him to fourth place.

Walsh then tagged onto the back of Broome, with contact between the pair resulting in Broome slipping down towards the bottom of the track and hitting the infield tyre before re-joining the track.

This lap would be the last for Storer, who rode the wheel of a lapped car that was attempting to avoid the displaced infield tyre, launching him into a massive rollover which ultimately destroyed his car. Thankfully, Storer emerged unharmed.

With Broome having retired to the infield, it was Walsh who had taken over first place on the subsequent restart, and despite constant pressure from Millar, she could not be stopped throughout the remaining laps, clinching the feature-race spoils.

It was a crowded infield that began with Steven Hateley limping to an early stop after being in the wrong place at the wrong time on the opening lap when he was collected by another competitor. He was later joined by Shaun Clapp, Ashley Cook, Broome, Shaun Lyness, Storer, Elira DeGrandi and Jeremy Beddison.

Earlier in the night, the four heat-race wins were shared between Millar, Beddison, Lyness and Broome.

The next event for Victorian Wingless Sprints will be this Saturday night’s Peter Merrett Memorial at Simpson Speedway, while the sixth Indy Race Parts Super Series round will take place on May 11 at Horsham’s Blue Ribbon Raceway.

The Victorian Wingless Sprints would like to thank the naming-right’s sponsor of their 2018-19 season Super Series: Indy Race Parts.