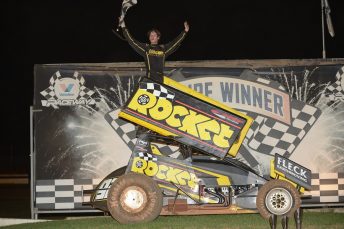 Sam Walsh has become the first driver to double up on main event wins this season with an exciting win at Valvoline Raceway and claiming his second George Tatnell Challenge victory.

Walsh started the race from pole position and knew he would be in a dog fight with James Thompson starting right next to him.

After leading the first six laps, Walsh was pushed back to second as Thompson made his presence felt, taking the lead. Thompson was beginning to edge away when disaster struck on lap thirteen when Matt Dumesny upended in a big way and third placed Robbie Farr had to take evasive action.

Sadly for Farr, he had to go to the work area and the rear of the field. Dumesny was out of the restart but luckily unhurt in the wild ride.

At the restart Walsh took the lead back from Thompson and led the remaining seventeen laps without a stoppage.

Marcus was making his way forward gradually throughout the race before pinching second place from Thompson with only a handful of laps remaining.

But no one had anything for Sam Walsh.

Whilst all of this action was going on at the front of the field, one of the drives of the night had to go to Alex Orr. Starting from the back of the B-Main, he transferred to the A-Main by virtue of a win and slogged it out lap after lap to claim a well-deserved sixth place finish.

So at the chequered flag it was Walsh ahead of Marcus Dumesny, Thompson, Ben Atkinson finished a great fourth and equally as good was Andrew Wright in fifth.

Alex Orr was sixth ahead of Daniel Sayre, Danny Reidy, Troy Little and Grant Tunks rounded out the top ten.

Earlier in the night, Robbie Farr set quick time in flight one with a blistering 11.562 second lap and Matt Dumesny was quickest in flight two with an 11.857 second lap.

There were some massive crashes in heat race action. Graham Lagerlow, Mitchell Dumesny, Chris Street and Michael Saller all took big rides. Happy to report that all were A-OK.

The next event on the SANSW calendar will be next Saturday night, December 16 for the next Development event ahead of the 38th running of the Australian Sprintcar Grand Prix at Valvoline Raceway on Boxing Day.