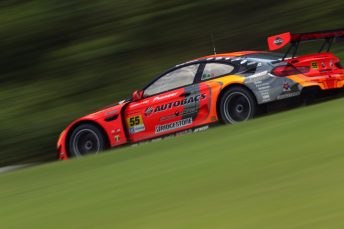 Arriving at Sugo with confidence high after securing their maiden GT300 podium result last time out at Autopolis, the Autobacs Racing Team Aguri drivers relished the arrival of rain prior to Sunday’s race and Takagi went on to deliver a stirring drive during the first half of the wet contest.

Carving his way through the order from 21st on the grid into the top four by the midway point, the Japanese driver climbed into third place in GT300 after a mid-race Safety Car period and then set his sights on second.

As he headed into Turn One, Takagi positioned the No.55 BMW M6 on the outside of the second placed Lexus but the rival machine moved across and turned into the ARTA car – pitching Takagi off the circuit and leading to retirement.

With the race coming to an early conclusion before Oxfordshire driver Walkinshaw had even climbed aboard for his stint, there was double frustration for the Super GT rookie. That said, the sensational pace shown by Takagi means the duo remain very confident for the championship’s return to Fuji just a couple of weeks from now.

“We were looking really good”, said a vexed Walkinshaw, “Shinichi had just taken third and was fighting for second, but then the Lexus came across and turned into him – nothing he could do. Who knows what could have happened in that race, the conditions suited us and the car was strong. It’ll be one of those races you look back on at the end of the season and think what might have been.

“We knew if it rained we’d be strong, the ARTA BMW was very, very quick but at least we’re heading back to Fuji now for the next round where we know we have a good package in all conditions. This wasn’t our weekend, to say the least, but we’ll just look forward to getting back on track at the next one now.”

Qualifying on Saturday didn’t go according to plan for the ARTA squad at all when red flags during the session impacted the true potential. As a result, the No.55 car was classified an unrepresentative 21st on the grid for round four.

With morning warm-up on Sunday wet and rain continuing to be a factor into the race itself, Takagi and Walkinshaw had high hopes for what might be possible. Off the start the Japanese driver quickly gained several places before an early Safety Car was required due to debris on the track.

At the re-start, Takagi looked to make up more ground and within just a handful of laps he had sliced his way through into 12th position in GT300 as the race neared one quarter distance. Soon enough, he had broken into the top 10, then the top eight and then sixth as the podium got closer.

Rising into fourth place just before mid-distance, the Safety Car was then required once more due to a car in the barriers. After the re-start, Takagi passed the third placed Subaru to brilliantly move into the podium placings but the contact just after from the Lexus led to the very frustrating early finish.

Round five of the Super GT Championship season will take place just a fortnight from now, over the weekend 5th/6th August, at Fuji in Japan.