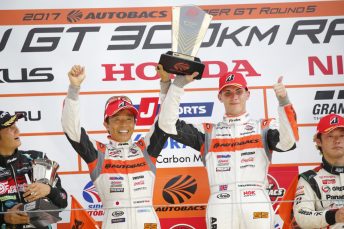 Marking Chipping Norton-based Walkinshaw’s maiden win in ultra-competitive Super GT, the fabulous result also enabled the ARTA duo to leap from seventh in the GT300 championship into the top three, within just three points of second place in the standings.

On a truly memorable day for Aguri Suzuki’s team, as well as the GT300 success with Walkinshaw and Takagi the ARTA squad also emerged victorious in the GT500 category with the Honda NSX-GT of Tomoki Nojiri and Takashi Kobayashi.

“My Sunday cruise was perfect!”, said an ecstatic Walkinshaw immediately after the race, “Takagi-san gave me a nice lead and I just had to control the gap to the Mercedes behind me. When he started closing down I was able to pull out a little bit more time. The car was perfect, thank you to the whole team and Takagi-san – it’s been a perfect weekend really.”

Everything started superbly for Walkinshaw and Takagi in practice on Saturday, 5th August, with the fastest time of all in GT300, just under 0.3 seconds quicker than the closest challenger. In the opening qualifying session, the BMW pairing ended the run with the 11th best time to progress into the all-important top 14 shoot-out.

Takagi then produced a superb lap of 1m37.525 seconds to secure his and Walkinshaw’s first pole start of the season in GT300. Notably, it was the Japanese driver’s 12th career pole position in Super GT and also marked a notable double for the ARTA squad with the Honda NSX-GT also securing pole position in GT500.

Making a faultless start to Sunday’s race, Takagi led away at the front from the similar No.7 BMW and steadily built a healthy advantage. By lap 10 his lead was well over four seconds and the ARTA racer continued to stamp his authority on GT300 to increase his cushion over the rest to almost nine seconds at one third race distance.

As the first driver change pit-stops began to be served around the halfway point, Takagi stayed out and when he eventually headed for pitlane, approaching two thirds distance, the lead was a superb 37 seconds.

Walkinshaw climbed aboard for his stint and after a very clean pit-stop he joined the race in fourth position, the highest placed of those to have made their mandatory driver changes. Running just over a second to the good over his closest challenger, the Oxfordshire racer began to edge away and also moved higher up the order as the GT300 cars which were yet to visit the pits eventually did so.

With just over 20 laps to go Walkinshaw was back into the podium placings and he soon moved up into second place behind the No.2 Syntium Evora. When the Evora pitted, the ARTA BMW moved back into its rightful place at the front and as the race neared the final 10 laps Walkinshaw’s lead was an impressive five seconds.

Driving faultlessly, the first year Super GT racer went on to take the chequered flag comfortably clear and in the final classification he was actually credited a lap ahead due to his position on the track between the lead GT500 cars.

World famous Suzuka, home of the Japanese Formula One Grand Prix, will host the sixth round of the Super GT Championship season over the weekend 26th/27th August.