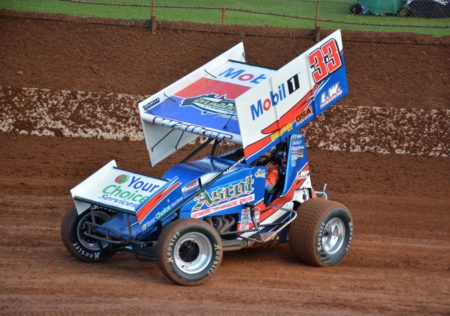 Bouncing back from a setback earlier in the night, Callum Walker became only the third person to secure a Sprintcar feature race win at Archerfield Speedway this season with an impeccable drive to take out round six of the East Coast Logistics Track Championship on Friday night (January 1). In what proved to be a dream start to the New Year for Walker, he qualified on pole position and led all 35 laps of the feature race to finish ahead of series leader Lachlan McHugh, who found himself deposed from the top step of the podium for the first time this season, while Tasmania’s Jock Goodyer finished third ahead of Aaron Kelly and Mitchell Gee.

In the Paul Britten 44 Dirt Modified feature race, David Clark held firm at the front to secure the win ahead of Geoff Phillips, with Mark Robinson finishing third as the first of those who elected to start from the rear of the field. In a race that holds so much personal significance for him, Kevin Britten dished up a mighty display in his charge through the field into fourth, slipping ahead of Tony Dunn in the in the shadow of the chequer.

A 36-car field fronted for Sprintcar qualifying, but only 35 competitors would race the clock with Luke Oldfield unable to fire the #17 for hot laps or time trials, leaving him devoid of any points and required to start dead last in each of his heat races. Cody Maroske also encountered problems when he inexplicably hit the track without a timing transponder, an oversight that saw him restricted to a single lap against the clock at the completion of qualifying and left languishing 22nd overall as the last car to slip under 12 seconds. Paying no heed to the dramas unfolding around him, McHugh stopped the clock at 11.389 to secure KRE Fast Time for the fourth time this season, with Walker (11.406) and Goodyer (11.448) next quickest ahead of McNamara, Gee, Randy Morgan, Kevin Titman, Kelly, Dan Murray and Dylan Menz.

Kristy Bonsey led the opening laps of the first heat before ultimately slipping to third by races end as Brent Kratzmann picked up the win ahead of McHugh, who advanced from the outside of row four.

Heat two started with a misstep when Lachlan Caunt and Adam Butler crashed out in turn one, leaving the latter as a spectator for the rest of the night. With Walker also forced to the infield courtesy of a flat tyre, Andrew Corbet emerged the early leader until he got out of shape in turn four on lap five and invited Brock Dean to take over the top spot. Corbet would recover to secure second, with Mitch Gowland grabbing third.

Brad Ayers led throughout heat three from the outside front row to lead Daniel Cassidy and Allan Woods to the chequer.

Cassidy was back on track in heat four and was able to keep McHugh at bay to secure a win, while Kratzmann annexed third on this occasion.

Heat five went to Titman over Corbet as Oldfield charged through the field from row six to finish third in his bid to secure the best possible starting spot in the B Main.

A 19-car field faced the starter for the B Main and while Dean led the opening laps before being usurped by Maroske on lap seven, all eyes were focussed further back as Oldfield set about climbing from position 15. When Sam Bylsma spun in turn four on lap three and was hit by Brendon Claridge to bring about a restart, Oldfield had already advanced to fourth to secure a transfer into the feature. However, never one to adopt a conservative approach, Oldfield continued his charge and grabbed third from Bonsey three laps later. With four laps remaining, Oldfield rounded up Dean to advance to second and then again showed why he remains such a popular figure with fans, charging around the outside of Maroske in the final turn to snatch the win.

Having edged out Morgan by just one point to secure a place in the Pole Shootout, Walker took maximum advantage in accounting for Gee and Kelly in the bronze round as Kratzmann somehow found himself upside down in turn three and out of action for the night. The silver showdown saw Walker again top the timesheets, outpacing McNamara, Goodyer and Gee. In the final clash, Walker would again prove too quick and secure pole position for the feature race, downing McHugh, McNamara and Titman on this occasion.

Given what had transpired at every other round so far this season, many people no doubt expected McHugh to launch from the outside front row to lead the feature race field away. However, Walker had other ideas and set the pace from the outset, leaving McHugh in his wake as he zoomed clear of the field. A great start from Kelly saw him sitting third after just four laps when Titman parked in turn three to initiate a restart. With Walker continuing to lead the way, Oldfield was again on a charge through the field and was sitting inside the top ten after just five laps. Proceedings were halted again on 18 when Darren Jensen tipped over in turn four in an incident that also involved Corbet and left both cars on the infield. Just one lap into the resumption, Goodyer moved into third spot ahead of Kelly, with Oldfield now sitting sixth behind Gee. When Ayers stopped in turn two on lap 20, Walker saw his lead neutralised once again and Oldfield, who refused to abandon the high line despite the precariousness of his plight, was now within striking distance of the top three. Into turn four on lap 21, Oldfield dared once too often and found himself in the wall, his mighty effort failing to deliver a fairytale finish as he returned to the back of the field for the subsequent restart. With no further interruptions and double points up for grabs, Walker combined pace and precision to keep McHugh at bay and score an emphatic win. Goodyer maintained his hold on third spot in advance of Kelly and Gee while Maroske, after a slow start, would eventually climb to sixth ahead of Woods, Gowland, McNamara and Oldfield who, despite the fact that he passed more cars in one night than many competitors achieve in a lifetime, will be very disappointed in finishing tenth. Cassidy, Dean and Farrell, who used a provisional to secure a start in the event, were next in line, leaving Morgan as the final finisher.

The first of the Dirt Modified heats saw Andrew Pezzutti outpace Britten and Terry Leerentveld, while heat two went to Robinson in advance of Clark and Zac McDonald.

Josh Rose trounced the field in heat three, clocking a best lap more than half a second quicker than anybody else as he cleared away to finish five seconds clear of Chris Corbet and Trent Scofield.

Leading heat five by a comfortable margin and with a front row start in the feature within reach, Leerentveld smote the main straight wall to end his night early, handing the win to Phillips over Rose and Scofield.

At the conclusion of the Dash, which was won by Pezzutti over Robinson and McDonald, all six starters were invited to start the 44-lap feature race from the rear of the field and it was Hobson who drew the ire of the crowd as the only driver to refuse the offer, thereby securing a pole position start.

With Rose, Robinson, McDonald and Pezzutti being joined at the back of the 20-car field by Britten, it was Hobson who led the pack through the opening laps. Having started on the outside front row, Scofield quickly slipped out of contention as Clark, Randall and Phillips moved ahead. It was lap 10 when Clark went to the front as Robinson, who had quickly emerged as the quickest of those working their way forward from the back, moved into fourth on lap 20 courtesy of a spin from second-placed Randall in turn two. Further back, Britten was at his spectacular best and, like Oldfield in the Sprintcar main, he had no interest in moving from the top of the track as he slowly edged forward despite several close calls, seemingly determined to entertain regardless of the consequences. Having regained second momentarily as Randall restarted at the rear, Hobson soon succumbed to both Phillips and Robinson. As the race drew to a close, Clark maintained his position at the head of the queue, leading Phillips and Robinson to the chequer as a final corner surge from Britten propelled him to fourth overall. Tony Dunn was impressive in securing fifth ahead of McDonald, with Hobson backsliding to seventh. Jay Davey, Scott Cannon and the recovering Randall rounded out the top ten ahead of Rose, Scofield, Pezzutti, Andrew Firth and Phil Roberts.

Following heat wins to Wayne Kirkman and Daniel Taylor in Outlaw Sedans, it was Taylor who destroyed the field in the feature race, finishing two laps clear of the minor placegetters in Bradley White and Jamie Olsen.

Both Ben Robertson and Ron Hornbuckle were heat winners in Open Sedan A before Robertson backed up to win the feature race from Gary Kivella and David Clarkson, while Ben Harris won both heats in the B ranks and then romped home in the feature, leading Elgan Dalton and Brad Hill to the line.

In a thrilling finish, Ryley Smith edged out Jackson Goldie by just 0.097 to win the Junior Sedan feature race, with Jack Betts annexing third ahead of Harley Graham and Daisy Smith. After winning the opening heat, Smith finished second behind Goldie in the next two outings before bouncing back when it mattered most.

Henry Titman, Kacy-Lee Black and Jared Boys shared the spoils in the Formula 500 Junior heats with a win apiece, but come feature race time it was all Black as she cleared away to finish six seconds clear of runner-up Noah Ball. Tim Devine finished third ahead of Boys, with Kinser Claridge and Amanda Chaffey the remaining runners.

Racing returns to Archerfield Speedway on Sunday night (January 3) with a massive night of motorsport featuring round two of the Sprintcar Super Sevens Series, the Modified Sedan Firecracker, round two of the Formula 500 Speedweek Series and Compact Speedcars, with more than 100 competitors nominated.