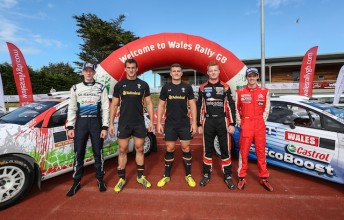 As part of its final preparations for rugby’s forthcoming showpiece tournament (18 September – 31 October), the Welsh training squad was put through its paces at an open training session in north Wales just days after its first warm-up match against Ireland in Cardiff at the weekend.

And a trio of Wales’ top rallying talents Elfyn Evans, Osian Pryce and Tom Cave also took time out of their busy schedules to wish members of the Welsh team the best of luck in their Rugby World Cup campaign.

Elfyn Evans, born and bred in Wales, said rugby is the only sport he follows outside his hectic schedule in motor sport: “It’s been great to see the national squad train up in north Wales in front of a packed crowd, there’s always a warm welcome here at Parc Eirias which hosted the opening ceremony of Wales Rally GB last year.

“I’d like to wish all the boys good luck for the Rugby World Cup, which is such a big event for everyone in Wales. Coming from mid-Wales, there’s no escaping rugby and it’s the only sport outside of motor sport that I actually follow. Now to have these two fantastic world sports events in Wales back-to-back later this year is just fantastic.”

Warburton said it had been a positive trip to north Wales with a great reception for both rugby and rallying at Parc Eirias.

“It’s great for the spectators that live in Wales to have world-class events that put Wales on the map.

“To have so many Welsh sportsmen competing at the top level of world sport is good for Welsh sport as a whole. A lot of the boys are petrol heads and love the adrenaline sports so it’s great for us to mix the sports.”

Ben Taylor Managing Director of Wales Rally GB said: “Rugby and rallying are two of the most popular sports in Wales and by showcasing these two major events we celebrate the economic value, business, tourism and commercial benefits that global sport brings to Wales.

“We are delighted to have agreed another new deal with Welsh Government whose support has been critical to the success of Wales Rally GB and it’s great news for motor sport sector in Wales and the UK.”

“These two major events will mean that the world’s eyes are on Wales yet again and provide a fantastic opportunity to raise the profile Wales, our sporting greatness and capability of hosting world-class events.

“As one of our highest profile events we are pleased to have extended our support for the Wales Rally GB and look forward to this year’s event. Our events and attractions will play a part in positioning Wales as a leading destination for adventure during The Year of Adventure 2016.”