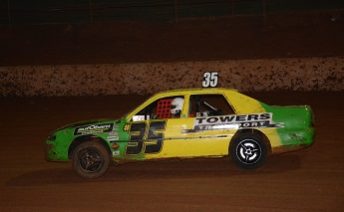 With a couple of late withdrawals, 17 cars fronted for the second attempt to stage the Queensland Street Stocker Championship after the event was washed out last season. Whilst many drivers struggled to find the right set-up for the Archerfield layout, Carlson had no such difficulties and charged home to win the opening heat from Dave Putsey and Jamie Smith.

Wakeman showed his hand in heat three when he led home the only Queenslander in the field in Peter Thompson, with an ill-handling Davoodi annexing third spot.

Carlson doubled up in heat four over Jamie Smith and Chris Marino, who then followed up in heat five to outgun Davoodi and Smith to grab a win.

The final heat saw Wakeman and Carlson finish first and second respectively to secure the front row berths for the feature, with Josh Donnelly third home.

Carlson got the best of the start in the 25-lap championship decider from pole position and held sway at the front for the first half of the race with Wakeman in close pursuit. As the race progressed, Carlson found himself unable to fend off Wakeman’s persistent advances and it wasn’t long before the only lead change of the race was transacted, putting Wakeman in control as Carlson now found himself under pressure from Smith and Davoodi. As the laps wound down, Davoodi would advance into second position, leaving Carlson to successfully fend off Smith’s bid for the final spot on the podium.

Wins in the three Junior Sedan heats were shared between O’Connell, Weir and Jackson Goldie and it was Weir who took command of the championship feature at the drop of the green. Weir remained in control until he found himself squeezed into the main straight wall by a lapped car, allowing O’Connell to pounce for the race-winning pass. Weir recovered strongly but couldn’t reclaim the lead and had to settle for a runner-up result while Reeves pipped Jaiden Healey in a close contest for third.

Following heat wins to Ben Walker, Nathan Politch and Klinton Hancey, it was business as usual for Queensland champ Terry Leerentveld in the Modlite feature race, surviving a series of incidents in the opening laps before snatching the lead from Sean Rose and taking control of the race. Brad Dawson snared second spot ahead of Scott Lehfeldt, category debutante Dallas Czerwinski and former state titleholder Will Butler, with Hancey and Michael Kendall the best of the rest.

Keith Blatch dominated a small field of Lightning Sprints, winning all three heats and the feature race with a minimum of fuss. A late charge around Michael Gollagher propelled Dave Fanning into second spot in the feature, with Jeremy Hassall and Jayden Mathers the only other finishers.

The Wingless Sprint heats produced some of the best racing they have delivered for quite some time, with Brant Chandler, Cody O’Connell and Brian Dixon sharing the spoils. The feature race was a much more subdued affair though as Chandler cruised home to clinch the opening round of the Ian Boettcher Race Parts Club Championship. Paul Robinson raced into second spot in advance of O’Connell, Brad Keiler and Geoff Davey.

Ben Robertson was unstoppable in the Open Sedan B action, winning all three heats and dominating the feature race to finish more than six seconds clear of Scott Taylor and Ben Taylor.

The Open Sedan A feature went to Wayne Kirkman in advance of Daniel Taylor, Les Eisenmenger and Greg Town, while Jason Walsh led throughout the Ford vs Holden vs Sigma sedan feature to defeat Matthew Hannigan and Bernie Wright.

The next event at Ausdeck Patios Archerfield Speedway is on Saturday, October 7 with round two of both the East Coast Logistics Sprintcar Track Championship and Polar Ice Midget Track Championship, plus Compact Speedcars and Formula 500 Juniors.