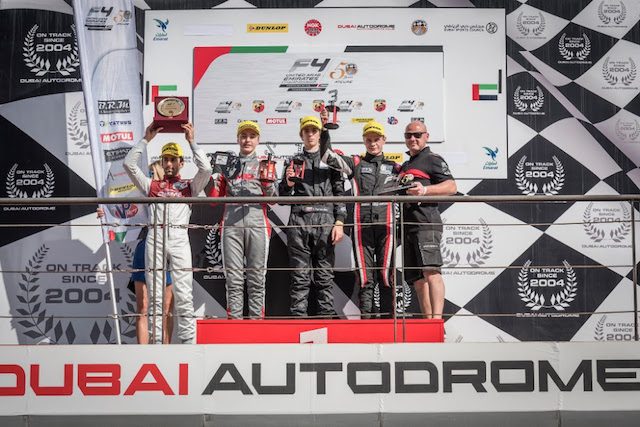 MEDIA RELEASE: Team Motopark’s Jonathan Aberdein has won two from three races at Round 3 of the 2016/17 Formula 4 UAE Championship this weekend, but it was his Venezuelan teammate Sebastian Wahbeh who became the first new driver to claim victory in the inaugural season of the Middle East’s newest open-wheeler championship.

For the first two championship rounds, the experienced German F4 team had claimed victory in all seven previous races thanks to South African, Aberdein (#21), but Motopark’s expansion from a two-car to four-car operation at the Dubai Autodrome round saw added competition among the field.

Wahbeh – who competed fulltime in the Italian F4 Championship last year with one race win and pole position to his credit – finished second in his first race on Friday evening before the 16-year-old claimed honours in the reverse grid Race 9 on Saturday morning.

“Sebastian showed good results, strong pace, he had two front-row qualifying results, a second place finish and one win, so it’s all positive for his development as a racing driver,” said Team Motopark principal Timo Rumpfkeil.

“He has already done his winter testing in Europe but this was the first time he has driven the German F4-spec car. With his plans to race again in Italy in a few months time, it was really important for him to get back into racing mode and we’re happy with how he has competed against everyone and also worked with the team.

“For Jonathan, there has been a lot of pressure on him this year, especially with his teammate Logan [Sargeant] pushing him the whole season. He was unlucky not to get that win but it is unrealistic to win everything. These results are still good preparation for European racing which starts in a few months time,” concluded Rumpfkeil.

Mohammed Ben Sulayem, President of ATCUAE and Emirates Motor Sports Foundation, added his praise for all competitors as the season heads towards its final two rounds.

“I would like to congratulate all of our competitors for their sportsmanship and passion in developing their racing careers here in the UAE. We are very happy to see everyone improving their results, especially our drivers from the GCC, and we wish everyone all the best as we end the year at Yas Marina Circuit in the next two months,” said Ben Sulayem.