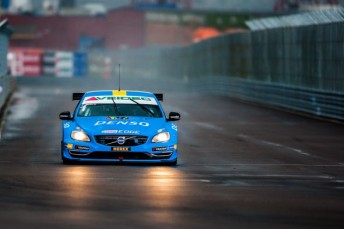 Volvo Polestar Racing drivers out for revenge at Falkenberg

Volvo Polestar Racing top drivers Thed Björk and Fredrik Ekblom are heading to this weekend’s STCC race in Falkenberg with a lust for revenge. Björk had his only retirement of the season there last year and Ekblom was forced to retire on the warm up lap in the previous race in Gothenburg.

“I am looking for revenge from last year. The DNF is going to be changed for a victory to continue to gain on Fredrik Larsson in the championship lead,” said Björk.

Ekblom has shown strong form in the first two race weekends of 2014 with one victory and one pole position. But the triple STCC champion was unable to show that in Gothenburg as he was forced to retire before the lights even went to green due to technical problems.

“It was frustrating to not even being able to start the race and we lost important points. But I am still in touch with Thed and Fredrik in the top of the championship and I had a strong weekend in Falkenberg last year. I am as always driving for victory,”said Ekblom.

Prince Carl Philip Bernadotte is also on the hunt for revenge this weekend after a tough start to the season. The 35-year-old took his so far best STCC finish in Falkenberg last year with seventh position.

“I am not pleased with the start of this season. The speed is there but we’ve had a lot of bad luck. I like Falkenberg and my goal is a similar result as last year here,” said Bernadotte.

A tough race weekend lies ahead of the Polestar drivers with the current heatwave in Sweden as well as the challenge of the reversed grid, which so far this year has provided a lot of incidents in the first race of the weekend.

“We are getting inexperienced drivers who hasn’t really got the speed for the top in the front of the field for the first race, as well as them not looking in the rear view mirror enough. We are analyzing the strategy properly for this ahead of the weekend and we are going to show the juniors what’s what!” said Björk.