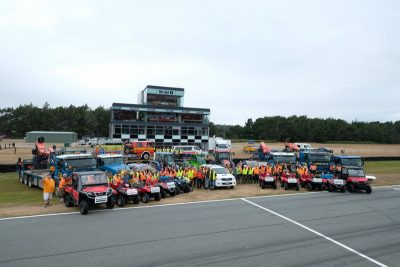 Motorsport is one of many sports in New Zealand that would not function without volunteers and that’s why MotorSport New Zealand (MSNZ) is marking National Volunteer Week 2018, which concludes 23 June.

MSNZ, the governing body for four-wheeled motor sports in New Zealand, has a small team of eight paid employees and contractors based in Wellington so without the support of hundreds of volunteers, the approximately 670 permitted motor racing, rally and club events per year could not take place.

MSNZ President Wayne Christie says motorsport is no different to other New Zealand sports in its reliance on volunteers, and like other sports and charitable organisations, MSNZ must continually strive to improve in how volunteers are recognised for their contributions, are trained, kept safe and looked after during what are often long days at a motorsport event.

“The welfare, recruitment, recognition and retention of our motorsport volunteers is vital to our sport’s long-term success,” Christie says.

“We have just under 5,000 licenced motorsport competitors in New Zealand, creating around 20,000 entrants (participants) at all levels of motorsport events around the country each year. Many of these competitors give back to the sport by offering to volunteer at a race, rally, motorkhana or hillclimb that they’re not competing in. Others rely on the dedication and efforts of several hundred motorsport volunteers to ensure their chosen event is run safely and fairly, that competing vehicles meet the technical regulations, that their pit crew has a space on which to work on their vehicle and so on.”

The current situation is that in some regions, particularly the wider Auckland-to-Waikato area, several multi-day events can run across numerous consecutive weekends, putting considerable pressure on a relatively small number of volunteers who turn out to work as safety marshals and officials for the event organisers.

“If we don’t ensure our volunteers are well looked after, and work with event organisers and the clubs who help co-ordinate our volunteer resources, the reality is that some events simply won’t have enough skilled personnel on the ground to run.”

Christie says it’s been suggested that if every licenced competitor volunteered at just one event each year, it would both help the sometimes short-staffed volunteer crews and give the competitor a fresh appreciation of the efforts needed on the other side of the Armco or timing equipment.

This situation is why the board of MSNZ is in full support of the Volunteer Advisory Commission whose members, drawn from the ranks of on-the-ground volunteers, are tasked with helping the organisation address issues of volunteer welfare, recognition and training.

The group is utilising the skills of MSNZ’s communications consultant Kate Gordon-Smith to help promote what motorsport volunteers do with a region-by-region plan to showcase the many benefits of being a motorsport volunteer. A highly-experienced training manager, Carl Fenn, has been contracted to review training modules for key roles in the volunteer officials programme. In time, this will lead into a structured volunteer induction programme. The commission members are also working with the 90 motorsport and car clubs which jointly make up MotorSport New Zealand Incorporated to improve how volunteer training is recorded and developed. Initiatives such as the trans-Tasman female official exchange programme, run by Women in Motorsport New Zealand in conjunction with the Women of Australian Motor Sport, are other ways that volunteers are recognised for their dedication and achievements, and can gain further skills to benefit themselves personally, their volunteer colleagues and motorsport as a whole in New Zealand.

“We have also created the MSNZ volunteers’ register,” says Christie. “Because around 30% of our volunteers do not belong to one of our affiliated clubs, it’s important we have the means by which to communicate with them. Anyone who is currently volunteering or would like to volunteer in the sport can create a profile on the register. They can provide valuable feedback to MSNZ and receive helpful communications about training and event volunteer opportunities.”