The Volkswagen Beetle GRC is unveiled

The Volkswagen Beetle GRC is unveiled 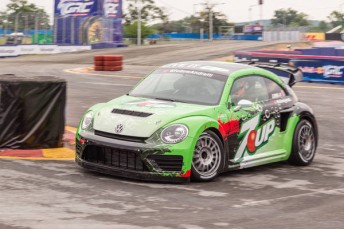 Volkswagen of America and Andretti Autosport have unveiled the race-ready Volkswagen Beetle GRC for the Global Rallycross championship.

The 544bhp (400kW) four-wheel drive powerhouse, which will make its debut with Tanner Foust and Scott Speed at the wheel later in the year, was launched ahead of the third round of the season in Washington D.C.

Andretti Autosport will initially continue to field the Polo RX Supercar, with which Scott Speed has already claimed two wins this GRC season.

The Global Rallycross Beetle promises to follow on seamlessly from this success. Its spectacular look and technology developed specifically for use on in rallycross are guaranteed to set the pulse of any fan racing.

“After Volkswagen of America’s impressive start on the rallycross scene, the launch of the new Beetle for the GRC represents the next major milestone,” said Volkswagen Motorsport Director Jost Capito.

“The Beetle GRC boasts a unique appearance and state-of-the-art technology.

“It will sweep fans off their feet. We now face an intense program of testing, to ensure the beetle is as well prepared as possible for its race debut in autumn.”

The two drivers, Tanner Foust and Scott Speed, were impressed by the Volkswagen Beetle GRC.
“The Polo has already proved super-competitive,” said Speed.

“And we are really looking forward to racing with a car that has been engineered specifically by Volkswagen Motorsport for GRC competition.”

Foust added: “I know I can’t wait to race the Rockstar Beetle. There’s no cooler looking car in the series.”

The Volkswagen Beetle GRC is the most uncompromising model of the third generation Beetle.

It was developed from scratch as a rallycross car and features a 544bhp (400kW) straight four-cylinder engine, sequential six-speed racing gearbox, multi-plate limited-slip differentials on the front and rear axles, McPherson struts and ZF dampers.

Not is what lies under the bonnet spectacular, but so is the exterior of the car: mudguard extensions, a larger rear wing, its low lie and streamlined front give it an aggressive, sporty appearance.

“We have been very pleased with the performances of the Polos so far, and couldn’t have got off to a better start in Global Rallycross” said Clark Campbell, General Manager, Motorsport, Volkswagen of America.

“We hope that the Beetle will prove to be equally competitive when we debut it.”