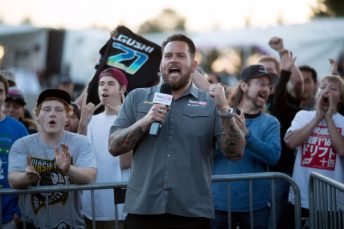 MEDIA RELEASE: One of the biggest drift events ever held in New Zealand has attracted one of the biggest names in the sport from the United States. Jarod De Anda will man the microphone at Mad Mike’s Summer Bash at Hampton Downs on Saturday, February 18.

“With any event, whether it be boxing or motorsport, the announcer plays a huge part in making it a success,” says ‘Mad Mike’ Whiddett, the man behind the Summer Bash.

“There’s no one on the planet with more knowledge about drifting than Jarod De Anda. He started in the grassroots of the sport and he’s been the announcer for Formula Drift for 13 years. To have his American accent, his spark and his enthusiasm for the sport at the Summer Bash is a huge plus for us.”

De Anda has been the announcer for Formula Drift in the US since 2003 and he’s also worked on Red Bull Global Rallycross, the Baja 1000, Red Bull Crashed Ice, Frozen Rush and many other action sport events over the years. His career in the automotive industry started at the age of 18 when he worked at a tuner shop in San Diego.

“I grew up street racing in San Diego but being 6’4″ and 250lbs I knew I never had a future behind the wheel,” says Jarod. “I found my sweet spot behind the microphone instead and I feel blessed. I was lucky enough to get involved in the early days of drifting in the US. I’ve seen every single run of the Formula Drift championship both in the US and internationally and I’ve travelled the world to cover the sport.”

Jarod has been to New Zealand twice before to MC the Red Bull Drift Shifters event and he’s a big fan of drifting in this country.

“New Zealand’s drift scene has grown over the years. The builds and cars are getting gnarlier and Kiwis have their own sense of style on and off the track. Guys like Gaz Whiter, ‘Fanga’ Dan and Cole Armstrong, just to mention a few dudes, exude that Kiwi attitude. Then there’s ‘Mad Mike’ of course who’s taken his ‘stick it to the wall’ style across the globe from New Zealand to the US to to Japan.”

“Mike is first and foremost a professional but he’s also got a very personal touch. He’s developed this brand that people want to part of. He’s got a very magnetic personality and he’s passionate about what he does, who he works with and the sport of drifting. He’s got this incredible energy and anything he does he does it with style.”

“Professional competitive drifting is the pinnacle of the sport but the main motivation behind the Summer Bash is to have some fun with friends and I’m sure it will be a fun experience for drivers and fans alike. I’m pumped to be part of history at a cool venue like Hampton Downs.”

How would you describe your commentary style?

“I speak American,” laughs Jarod. “I don’t speak the Queen’s English. I’m an excitable, yell-at-the-top-of-my-lungs kind of guy but I also appreciate the technicalities of the sport and the skill of the drivers. ‘Send it!’ is my go to line when the cars are on the start line all revved up and ready to go and I can’t wait to call all the action at Hampton Downs.”