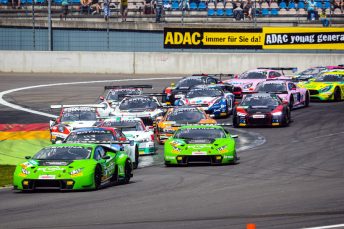 The winning streak of GRT Grasser Racing Team continues: At the second weekend of the ADAC GT Masters at Lausitzring Mirko Bortolotti (I) and Ezequiel Perez Companc (ARG) on Sunday scored an impressive victory from Pole Position, leading from flag to flag, after already having reached P3 on Saturday. Christian Engelhart and Rolf Ineichen finished third in the second race, thus completing the fantastic result for GRT. Team principal Gottfried Grasser was over the moon: “After Monza, Brands Hatch, and Silverstone now the win at Lausitzring and a double podium – I have no words any more. Four weekends with a total of five victories, that´s incredible, especially as the races were hard and close once more. I am ever so content with all the drivers and the whole team, finally all the hard work in testing pays off. For me, it can go on just like this!”

Victory of the Lamborghini Huracán number 19 on Sunday was never in danger after Mirko Bortolotti laid the foundation with a good start and a strong first stint: “That was a perfect race ans a fantastic win. We did everything right”, the Italian was more than content afterwards. “I was able to defend the lead at the start in the first corner. In the beginning, Philipp Eng put me under a lot of pressure, but during the race I could increase the gap.” After the pit stop which was done as late as possible, “we could pull out an even further advantage as the guys behind us were fighting each other, so Ezequiel at some point had a seven second lead. That was a great performance, I am really happy for him and the whole team.”

Also, the Argentinian, who for the first time also was the winner of the Junior category, was ever so happy: “That´s my first victory with the team. Today everything went right. The team did a great job and Mirko´s first stint was really mega. So, I just had to bring it home and defend our lead. I therefore tried to drive more with my head than with my heart, calculated, not risking too much, not pushing too hard. It´s a great feeling to have won here now after having been on the podium for the first time in the ADAC GT Masters already yesterday.” In the Championship, he ans Bortolotti now share P2 with 40 points, just six points behind Porsche drivers Robert Renauer and Sven Müller.

Christian Engelhart had put car number 63 on P2 on the grid, next to Bortolotti, but immediately faced some problems: “Unfortunately I did not have a very good start and I also received a five second penalty” – for not maintaining the correct starting position. Lying in fourth place, he entered the pits for the mandatory stop, “and there we served the penalty in very well-timed 5,1 seconds, without losing a position. Afterwards Rolf did a great job, taking Ricky Collard by surprise in the last corner when he made a mistake, an so saving the podium for us. He really deserved P3. Everybody in the team currently does a sensational job by always providing us with a perfect car.”

Ineichen who on Saturday had been involved into an unlucky incident with Stefan Mücke which cost a points finish, showed an impressive performance. First, he managed to defend in a very clever way against Jules Gounon and his Corvette, then he took the chance against Collard in his BMW so convincingly that even some opponents did not hesitate to show their admiration. The Swiss who also won the Trophy category for the third time this season could be really proud: “It was a great race, very tight until the end. We were fighting until the last minute as we knew there was still a chance to get to P3. We gave it all and now are really happy that it was enough to still reach the podium.”

The next challenge for the Grasser Racing Team will be the Sprint race of the Blancpain GT Series at the first weekend of June at Zolder/Belgium. Gottfried Grasser expects even more difficult conditions there due to chances in the BoP. “From our point of view, that would be really unfair, especially towards the other teams who are not able to handle the Lambo as well as we do. But it´s part of the game to sometimes not only slowing down the car, but also the team performance. At Zolder we will have to deal with 15 kilos of extra weight. Let´s see what we can still do, for sure it will be very hard.”