Victory for McIntyre and Tulloch at Hampton Downs three-hour race

Victory for McIntyre and Tulloch at Hampton Downs three-hour race 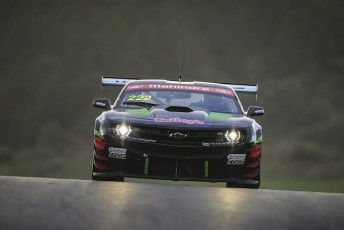 Only three Reiter Camaro’s exist in Australasia and today’s result is the first race win for the purpose built car.

The second of three rounds for the 2015 title, today’s win and the opening round second placing puts McIntyre and Tulloch at the top of the series standings.

“Absolutely stoked,” said McIntyre, who started the race at the front of the 39 car field.

“It was special to be the first to get a win in this GT race car.

“We had to work hard all day against some tough competition and came through with a faultless performance.”

Rain early in the day left the track damp for the race qualifying session. Swapping times with a debuting Mosler car McIntyre snared the fastest time at the end of the 30 minute session – setting a time 1/10second quicker.

Due to the large number of cars starting the race the field was held under yellow caution conditions until the lead car got to the fifth turn.

“It made the start of racing very safe and emphasised how critical it was to be that front car if you wanted to win.

“Our plan for the race was to sprint for the first two hours and get as much of a lead as possible so at the driver swap Inky could focus on getting to the finish first by a comfortable margin.”

Effecting that plan, a safety car period while they were a couple of laps ahead then negated the team’s gains. Back to a margin of three laps at the pit stop driver swap Tulloch quickly settled in to a race winning pace as the remaining hour un-wound.

Regarded as New Zealand’s toughest circuit for brakes the Camaro started to run short of stopping ability in the closing minutes. A close call just prior to the finish allowed the second placed car to close to within a lap.

Taking the finishers flag first the Tulloch Motorsport crew cheered as reality sank in at what the team had achieved.

For McIntyre the car’s reliability allowed him to focus on setup gains in a quest to produce an even quicker car.

“We’ve got a much faster car this weekend compared to the opening round. As the competition is heating up we need to get even more from it.”

The top ranked team has four weeks until the third and final round for the season. The final race will be held at Pukekohe on Saturday 25 July.