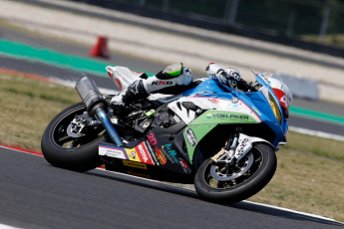 Munich. The BMW Motorrad Motorsport family can celebrate a victory in the FIM Endurance World Championship (EWC): team Völpker NRT48 Schubert-Motors by ERC took the Superstock class win in the 8-hour race at the Slovakia Ring near Bratislava (SVK). The BMW teams were supported on site by the BMW Motorrad Motorsport experts. In the Spanish Championship (CEV), BMW S 1000 RR rider Carmelo Morales (ESP) finished third on the podium in Navarra (ESP) at the weekend, defending his overall championship lead. In Canada, Jordan Szoke (CAN) returned to winning ways: the BMW rider secured his 61st win in the Canadian Superbike Championship (CSBK) at St. Eustache (CAN). The Alpe Adria Road Racing Championship (AARR) was also in action at the Slovakia Ring, and the BMW racers took a total of four wins in the Superbike and Superstock classes.

On the top step of the world championship podium: at the 8-hour race at the Slovakia Ring near Bratislava (SVK), team Völpker NRT48 Schubert-Motors by ERC celebrated a fantastic victory in the Superstock class of the FIM Endurance World Championship (EWC STK). Jan Bühn (GER), Stefan Kerschbaumer (AUT) and Julian Puffe (GER) shared duties on the #48 BMW S 1000 RR. After eight thrilling hours of racing, Kerschbaumer brought the RR over the line with a margin of 15 seconds over their closest rival in the class. In the overall race standings, the Völpker NRT48 trio was fifth in the highly competitive field of the EWC teams. Team LRP Poland also achieved a strong result: Markus Reiterberger (GER) and his team-mates Jaroslav Cerny and Michal Filla (both CZE) crossed the line in seventh overall and fifth of the Superbike class (EWC SBK).

Jan Bühn: “It was a fantastic success for us. For the team, it was the first-ever victory in the Endurance World Championship, as it was for me as a rider so it was just awesome to stand on the top step of the podium after eight hours of racing. We were lying in third after the start and improved to second when another team in front of us crashed. From then on we had an intense battle with the #333 team. I made a little mistake at the pit stop that cost us a minute and was worried that we could miss victory because of that so I tried to make up the time back on the track. I succeeded, took the lead in my final stint and Stefan then brought the victory home. One key to success was, apart from the great team effort, the low fuel consumption of our BMW S 1000 RR. We have benefitted from that during the entire season: we have a lot of power, our bike was incredibly fast on the straight, and at the same time we are able to save a lot of fuel.”

Stefan Kerschbaumer: “It was a tight battle at the very front. In the closing stages of the race, both us and our rivals on the #333 bike had to do another short notice pit stop. When we returned to the track, we were separated only by a few seconds but I managed to open the gap back to 15 seconds. When I crossed the line in first place, I was more than happy. The entire team did a fantastic job once again and we three riders have been consistant and on a similar fast pace. Our newcomer Julian was really great in his first ever endurance race. Despite the pain he suffered after a crash in free practice through no fault of his own, when another rider took him to the ground, he delivered super fast lap times. In addition, we could count on the low fuel consumption of our BMW S 1000 RR and were able to once more do the longest stints of all. All this together was key to victory.”

The third round of the 2017 Spanish Championship (CEV) was held in Navarra (ESP) at the weekend. Carmelo Morales (ESP) claimed another podium finish on his Graphbikes easyRace SBK Team BMW S 1000 RR. He finished the race in third place and defended the lead in the overall championship standings. Pedro Rodriguez (ESP / Castromaroto Racing) crossed the line in sixth position.

Carmelo Morales: “I was not comfortable during the race. We had managed to solve some problems, but I still struggled to go really fast. The positive thing is that we finished on the podium as I had some moments during the race battling for positions and have been on the verge of going to the ground. We have to keep working as our main objective is to win.”

Canadian record champion Jordan Szoke is back on winning ways: he dominated the third round of the 2017 Canadian Superbike Championship (CSBK) at St. Eustache (CAN) at the weekend on his BMW S 1000 RR of the Mopar Express Lane BMW Superbike Team. Szoke had another perfect weekend. He secured pole position, lead the race from the start, won with an advantage of over six seconds and also set the fastest race lap. It was his 61st win in the series and his second of the season. With the result, Szoke also extended his championship lead. Ben Young (GBR / Ben Young Racing) missed out the podium only by 0.065 seconds, crossing the line in fourth.

Jordan Szoke: “Our BMW S 1000 RR was fantastic all weekend, right out of the box. We have a great set-up here, and this is my strongest track. Our bike is running amazingly, and we had it dialled in for the race. I was a bit angry when light rain started during the race. I am a great rain rider but I knew that our bike was just really perfect in dry conditions. Nevertheless, I am really happy with that win.”

Next to the 8-hour race of the FIM Endurance World Championship (EWC), the Slovakia Ring (SVK) also hosted the second round of the 2017 Alpe Adria Road Racing Championship (AARR) at the weekend. The BMW S 1000 RR riders claimed four victories and a total of seven podium finishes.

In the Superbike class (AARR SBK), Karel Hanika (CZE / EKO IVRacing BMW CSEU) and Michal Filla (CZE / BMW Sikora Motorsport) successfully switched back to sprint racing after they had competed in the EWC race on Saturday. Hanika won race one of the AARR SBK while Filla crossed the line in second. In race two, it was the other way around: Filla took the win and Hanika was second. In the Superstock class (AARR STK), reigning champion Michal Prášek (CZE / Rohac and Fejty motoracing Team) was the winner of both races. In the first heat, Michal Šembera (CZE) joined him on the podium in third.

The BMW S 1000 RR riders in the USA were in action at the Utah Motorsports Campus for the fifth round of the 2017 MotoAmerica FIM/AMA North American Road Racing Championship (AMA) at the weekend. Jason DiSalvo (USA / Scheibe Racing / Hayes Brake) finished the two races in 13th and 11th respectively. Matthew Orange (USA / Maximum Effort Racing) crossed the line in 15th on both occasions.