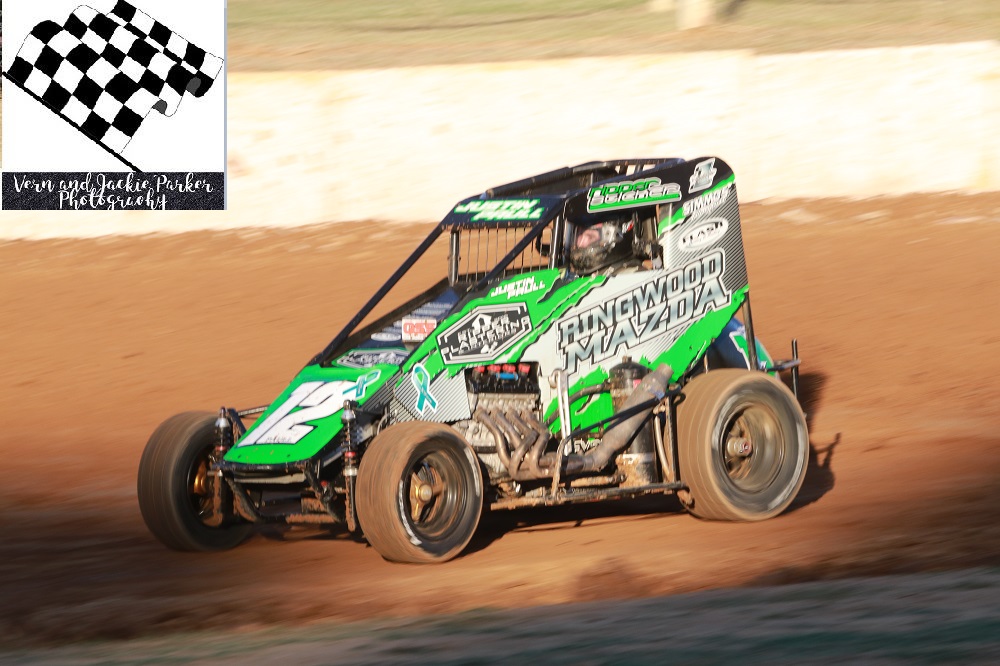 Wangaratta City Raceway played host to the 41st national title for the Compact Speedcar class with drivers from Queensland, New South Wales and across Victoria all converging on the city for the weekend. National champion Mark Heaton and Victorian champion Justin Paull were just two of almost thirty competitors vying for the win with the Victorian champion coming out on top after thirty gruelling laps.

Nine heat races were held for the competitors in the national title to qualify for the big race and the class was supported by all of Wangaratta’s local club classes.

Matt O’Neill from Queensland, Mark Heaton from New South Wales, and Tania Hallett from Melbourne were first round winners. Justin Paull won the first heat in round two taking the lead on the second last lap leaving his run at the front late, Michael Conway won heat five and O’Neill won again in the sixth heat. Rounding out all the qualifying the winners in the final round were Louis Rodriguez, Paull a second time and his sister Hallett also a second time.

When the flagman dropped the green to start the feature event Paull raced out to secure the lap one lead with his sister getting a great start crossing the line behind him in second with O’Neill back in third. O’Neill got his spot back on lap two with thirteenth spot starter Conway already up into eighth spot on lap two and Robinson also progressing forward with him.

Brown on lap fourteen was the first car to exit the race due to damage, incident or breakdown and it sparked a succession of others also. Andrew Wiles, Parkes, Cooper and Wark being some of them. At lap twenty, Paull was still at the front of the field with O’Neill, Heaton, Stewart, and Robinson now in fifth spot.

On lap twenty-one things went all pear shaped for Heaton as a race incident and damages claimed him and Stewart and Curren at this point of the race. With third and fourth gone, this shot Robinson up into third spot. As the lap continued on to thirty, Paull continued to hold a margin on O’Neill not letting off the gas knowing he was close. The flag was a welcome sight as Paull greeted the chequered first from O’Neill, Robinson, Rodriguez, and Cecil. Also finishing outside the top five was Lostitch, Hallett, Papa, Glen Wiles, Conway, and Day all on the lead lap, then Hutchinson and Williams.

For a second time, Justin Paull had become Australia number one in Compact Speedcars.

In other racing amongst the club classes Trevor Mills from Corowa won the Production Sedan final in front of Tom Barnard who proved difficult to get past. Locals at Wangaratta were rooting for Barnard the underdog in the race with the two-time national champion chasing him, hounding him and eventually passing him for the win by just .650 of a second. Scott Hawkins from Leeton was third and Chris Fitzgerald who earlier won two heat races finished in fourth.

Daniel Kettels, Daniel Joosten and Trevor Evans won heat races in the Standard Saloons before Evans led every lap of the final to beat Brendan Eames by just .393 of a second with Kettels third, Michael Poole in fourth and Scott McAuliffe in fifth spot.

Local Junior Sedan racers Marcus Maclean and Riley Balins won the heat races in the class on Saturday night before out of towner Jacob Tinworth passed race leader Balins on lap seven to win the final. Maclean also passed by Balins as did Cobie McGraw. Balins finished in fourth and Cooper Lack in fifth spot.

Kellie Lamb, Bianca Brown and Tay Cummins won heats in the Ladies Open Sedans. Cummins would go on to be the eventual winner in the final from Brown, Lamb, Grace Barrows and Bianca Ballantyne.

Finally rounding out the evening was the Sports Sedans class. Katie Meyer, Jackson Barneveld and Martin Heiner were the three qualifying race winners. Barneveld went on to win the final from Heiner, Nick Hill, Adrian Brown and Craig Cottier.