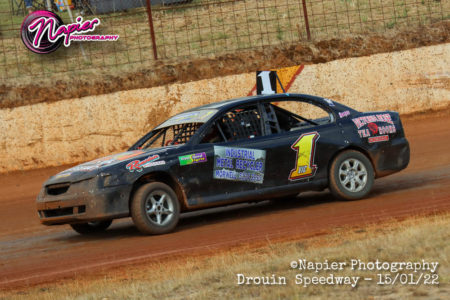 Just over twenty five race drivers entered the Standard Saloon event with the defending ‘Sally Memorial’ winner Jeff Blencowe amongst the line-up that included Shane Stewart and Daniel Stewart the current Victoria number one and three drivers and Daniel Walkinshaw, son of Sally for whom the race is in honour of.

Drivers competed across nine heat qualifiers where they raced in three each with Jacob Vuillermin, Walkinshaw, Daniel Stewart, Chris Miles, Beau Evans, Kane Gibson, Shane Stewart, Dean Spring and Shane Ardley making sure there were nine different winners on the way to the big race. After a top six qualifiers envelope mystery redraw, Miles started at the front of the field with Shane Stewart, Walkinshaw, Vuillermin, Daniel Stewart and Mark Borkowski the top six starters.

Miles got away early with the Victorian champion tailing him and Vuillermin in third. Walkinshaw dropped back down the top ten before attrition and his own passing of others brought him closer to the front again. During the race, a spin to Daniel Stewart sent him to the rear of the field and there was flat tyres, front suspension damage and crashes to various race drivers, the biggest being to Shane Ardley who required paramedical attention infield.

In the Sports Sedan Gippsland Cup action which doubled as a state Sports Sedan Power Series round the class Victorian champion Lee Beach began the nine qualifying races with victory, however it would be his club mates Rob Garlick. Brendan Miller and Dale Smith who would make the most of their starting spots in the qualifiers to secure two wins each. Beach, Joel Copeland, Garlick, Brendan Miller, Garlick again, Smith, Brendan Miller again, Scott Angus and Smith a second time rounded out the qualifying winners.
In the twenty-lap final, things started well for Miller at the front of the field before spinning himself out of contention. Garlick and Bradin Claridge who are high up in the state series standings were amongst the unfortunates not to finish the final. Beach had his front end torn up after another competitor suffering damage found itself in his way. Claridge could not get his car to fire up for the start and Garlick was travelling along nicely in the top part of the field before his car suffered damage.

Dale Smith controlled the race from the front and Scott Angus in a new car he put together for the family race team showed his talent moving up behind Smith. Jack Brennan made early outside passes in turn two that elevated him into the top group of racers early in the race and then changed his line to protect his gains. Smith motored on to victory ahead of Angus, Brennan, Jamie Paull and Brendan Miller who had made some ground recovering to finish in the top five.

In the ‘Melbourne IT Support’ Victorian Junior Standard Saloon series, opening round of the year, Harry Cecil, Zac Barwise, Nathan Miles and Beau Stuchbery won the four heat races between them before Cecil and Stuchbery in particular sprinted away as the lead drivers carved their way through the field with many exciting developing drivers. Towards the end of the race young Breanna Walker crashed into the front straight wall whilst in fourth causing a red light situation and the declaration of the race. Cecil the winner from Stuchbery, Barwise, Cooper Joynson and Jackie-Ann Angus.

Completing all the competition on race day was the Ladies Standard Saloons. Rebecca Glassborow with one win and Maddison Miles with two wins had the best of the qualifying results. Miles unfortunately due to damage could not finish the final and Glassborow picked up her second final victory of the year with Danielle Solly, Jemima Borkowski and Trish Meers the finishers.