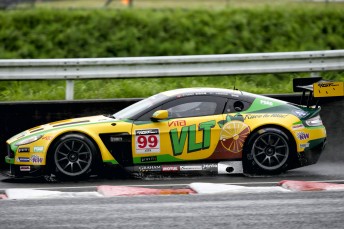 MEDIA RELEASE: Jonathan Venter is focused on continuing his march up the championship leaderboards this weekend in Fuji, Japan, for the next round of the GT Asia Series.

He is aiming to complete another successful round of podium results to help support his sustained attack on the championship.

Now equal third in the standings with Craft-Bamboo Racing teammate, Darryl O’Young, Venter is intent on cementing himself as the championship contender to watch out for as the season reaches its midpoint.

The young Australian performed flawlessly in Okayama and he was able to come away with 24 championship points after an excellent race one charge to P4 and a third place podium in race two.

Venter is confident that the #99 Aston Martin’s strong performance can continue as the pairing between himself and his teammate has proved to be so effective.

Jonathan Venter, No. 99 VLT: “Darryl and I have been working very well together in the Aston and the Craft-Bamboo team has been excellent with the car preparation and on race strategy.”

Venter will once again concentrate on producing a quick qualifying time to add to the string of strong sessions already seen this year.

The Aussie’s strategy will be dependent on the weather at Fuji and judging by past events held here during the rainy season, anything could happen. While the weather is unpredictable, the weekend is going to produce some more competitive racing while the top teams battle for the championship.

Since the start of the 2015 season Venter has constantly been developing his performance and this has been reflected in each race. The international GT driver wants to keep evolving his skill set with each coming round and knows how much of an important role this will play in Fuji.

“With every round so far I have gained a lot of confidence in the car and have been making improvements with each session, so in Fuji it will be important to maintain this progression and stay quick” said Jonathan.

Fuji Speedway is a historical Japanese circuit that has hosted some of the world’s greatest motorsport disciplines and Venter is proud to be a part of it, but recognizes just how tough this year’s GT Asia field has become.

Jonathan Venter said, “I am very excited to be driving the VLT Aston Martin GT3 this weekend in Fuji. It’s a great track and a great event with a very strong line-up once again for GT Asia. Let’s see what Fuji brings!”

The 4.563km circuit features 16 turns and a winding layout; it also features one of the longest straights in motorsport at 1.5km. The circuit was remodeled on a new design by Hermann Tilke in 2003 and boasts an 110,000 crowd capacity, where fans will be out in force to witness Craft-Bamboo Racing’s fight for the GT Asia championship lead.