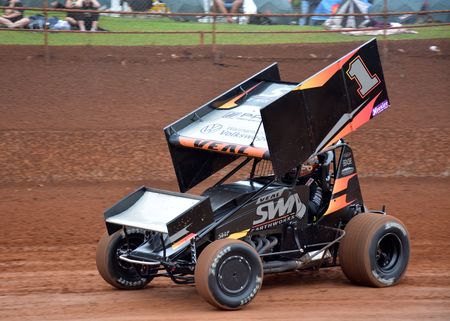 It has been a long time coming, but the 59th Australian Sprintcar Championship will finally be decided this weekend when defending champ Jamie Veal seeks to retain his crown at Archerfield Speedway over two big nights. Presented by Titan Garages, the championship will get underway on Saturday (April 30) and conclude on Sunday evening (May 1), with Veal taking on the very best competitors from across the country in his bid to join an elite group of drivers who have won this time-honoured event on more than one occasion. Veal finished third in this event on three occasions before becoming only the fourth Victorian to have earned the privilege of carrying Australia #1 and is undeniably the form driver of the moment. Fresh from three consecutive feature race wins at three different venues over the last two weekends, Veal has enjoyed the ideal preparation for the fight that awaits him from rivals young and old in what may well be the last time the championship is ever contested at Archerfield.

Veal blitzed the field to win both of the completed Easter Trail events held in South Australia and Victoria earlier this month and then followed up with another dominant display in Sydney last weekend to win the New South Wales Championship. The fact that Veal has also scored a feature race win at Archerfield this season should have the second-generation racer quietly confident of going back-to-back. Whilst the lure of championship glory has attracted more than 45 drivers from six states and territories, the only other previous winner of the event amongst the entries is Robbie Farr, who was victorious in 2004 and has finished on the podium on six other occasions. In fact, the only other two drivers in the field this weekend who have appeared on the podium at national championship level are the South Australia-based duo of Matt Egel and Steven Lines, with the latter having won two feature races at Archerfield in recent weeks to find himself sitting on the second line of favouritism alongside Tasmanian gun Jock Goodyer and a couple of Queensland speedsters who sit firmly atop the local Sprintcar hierarchy.

Luke Oldfield and Lachlan McHugh have completely dominated the Queensland Sprintcar scene for the last couple of seasons and both should fancy their chances of becoming only the third Queenslander behind Todd Wanless and Andrew Scheuerle to win this most prestigious of events. Last season, McHugh scored 12 feature race wins at Archerfield on his way to winning the Track Championship, adding another four wins to his tally at the start of this season before heading south for an interstate campaign that culminated in him winning the Grand Annual Classic in Warrnambool. Oldfield, meanwhile, has dominated the East Coast Logistics Track Championship so far this season with five feature race wins, having defeated Veal on two occasions along the way to declare himself a genuine title contender. Given that both Wanless and Scheuerle won their titles on home soil at Archerfield, there will be a bunch of locals who should fancy their chances of a strong showing, such as Aaron Kelly, Tim Farrell, Jy Corbet, Kevin Titman, Bryan Mann, Darren Jensen and Ryan Newton, the latter having secured his maiden feature race success just a few weeks ago.

Since the inception of this event in 1963, competitors from New South Wales have won on 39 occasions and once again a strong contingent is venturing from Sydney and surrounds in a bid to continue their domination of the results. In fact, it is the offspring of former championship winners who lead the NSW challenge, with brothers Marcus and Matthew Dumesny looking to emulate their three-time title winning father Max. Both Dumesny boys should certainly be in the mix, with Marcus returning to Brisbane on the back of a runner-up finish behind Veal in Sydney last weekend. Meanwhile, Jordyn Brazier is seeking to become the third member of his illustrious family to win this event, following in the footsteps of his grandfather Steve, who won on two occasions, and his father Garry who, with six wins, sits second overall behind Garry Rush as the most successful drivers in championship history. With Ian Madsen also in their midst and a very real chance of creating his own piece of history by joining his brother as a national championship winner, the NSW squad is strong in both quality and quantity.

Along with Lines and Egel, South Australia will also be represented by Daniel Pestka and Brock Hallett to form a formidable foursome, all of whom should be entering the weekend with the expectation that they will be amongst the front runners. Hallett featured on the podium at Archerfield a few weeks back and also finished third in the NSW Championship last weekend, a race in which Pestka finished fifth. With only two previous winners having hailed from South Australia, the last of which was Phil March back in 1999, this quartet is certainly in the reckoning to become the newest member of a very exclusive group.

As one the standout performers this season, both at Archerfield and elsewhere across the country, Jock Goodyer stands on the cusp of history as he seeks to become the first ever Tasmanian to win an Australian Sprintcar Championship. Goodyer is a feature race winner at Archerfield this season and, coupled with some outstanding performances in recent weeks that have netted podium appearances in Perth, Toowoomba and Sydney, such form puts him squarely in the frame as one of the biggest threats to Veal in his bid to retain his title. Furthermore, the terrific form of fellow Tasmanian Tate Frost on the mainland this season, along with the combined experience that Jamie Bricknell and Adrian Redpath bring to proceedings, the island invaders might be few in numbers, but they most certainly have the potential to deliver big results.

Whilst Sprintcars are very much the main attraction over the weekend, there will be, as always, plenty of high quality support racing on both nights, including a round of the TFH Midget Series, along with Formula 500s, Wingless Sprints and Modlites.

On Saturday night, Michael Kendall will be chasing his fourth feature win for the season in round ten of the TFH Midget Series, with the likes of Dylan Menz, Scott Farmer, Brad Dawson, Casey O’Connell and Brock Dean expected to offer up the most resistance. Dean is back aboard the Lachlan Paulger-owned #37 that he drove to victory in a TFH round earlier in the season and, while Menz comes fresh from his maiden Midget win in Toowoomba over the Easter weekend, Farmer is yet to make an appearance in victory lane this season and will be desperate to remedy the situation in front of what is sure to be a sizeable crowd.

Also on Saturday, Formula 500s continue what has been a busy few weeks for them with Liam Williams and Tomas Partington facing off to determine who is top dog. Williams was the pacesetter early in the season before Partington pounced to score consecutive feature race wins, only for Williams to bounce back to win their most recent Archerfield outing. As the only other driver in the field to have scored a feature win this season, expect Kurt Wilson to be looming large in close proximity to the front of the field.

Come Sunday evening, Wingless Sprints continue their remarkable record of delivering big fields with another 25+ car line-up. Included amongst the entries are a couple of NSW-based competitors in Jacob Jolley and Michael Butcher who have proven particularly difficult to beat this season. Casey O’Connell and Robert Mazzer are expected to be at the forefront of the local challenge, with the likes of Liam Atkinson, Lachlan Robertson, Jamie Usher, Ben Manson and Andrew Robinson also likely to feature in the thick of the action.

Whilst Terry Leerentveld, Klinton Hancey and national champ Sam Gollschewsky remain firmly entrenched as the benchmark performers in the Modlite ranks, a feature race win in Kingaroy last weekend by Brodie Boss proved a welcome change in the pecking order and the talented north Queensland-based racer, who has demonstrated his considerable skills in a variety or race categories in recent seasons, will be itching for another crack at the big three.

Saturday racing will include two rounds of Sprintcar heats, plus preliminary B Main and preliminary feature race, supported by Midgets and Formula 500s. The Titan Garages Australian Sprintcar Championship will conclude on Sunday evening with a final round of heats, followed by C and B Mains to determine the field for the 40-lap championship feature race, with support racing from Wingless Sprints and Modlites. Gates open at 3.00pm for online ticketholders, with general admission ticket sales from 4.00pm. Early racing commences at 4.30pm on both nights, with the main program to get underway from 6.00pm.