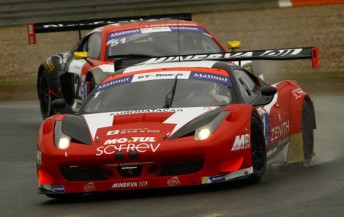 Reigning IndyCar Rookie of the Year and Tudor United SportsCar Championship driver Tristan Vautier will travel to Belgium this summer to lead Team SOFREV ASP’s assault on the 24 Hours of Spa from July 23-27.

The Frenchman, who has been based in the US since 2010, is returning for a second crack at the world’s most prestigious GT event as part of the same Jérôme Policand-led squad with whom he raced at the Ardennes two years ago.

It will mark Vautier’s second appearance at the classic endurance event, held around Belgium’s historic 4.352-mile grand prix circuit, after he finished a strong fifth in class and 10th overall at the 2012 edition.

After following up his 2012 Indy Lights title with a stellar debut IndyCar campaign, this season has seen Vautier switch to sports-prototypes as part of Mazda’s factory Tudor United SportsCar Championship programme.

But with a raft of top drivers and 30 cars – half the field – entered in the Pro-Am Cup category at Spa, he’s now eager to make a strong impression on his return to European racing.

Tristan Vautier said: “I am delighted to once again be contesting this iconic event alongside Jérôme and his team. Fabien, Eric, Ludo and I form a great team on both competitive and human levels.

“You always learn a lot when racing at the 24 Hours of Spa, especially with the difficult and changeable conditions, and in terms of traffic management too.

“It fits nicely alongside my American programme and I really can’t wait to get to the Ardennes. I’d like to extend my warmest thanks to SOFREV ASP, as well as my team-mates for their trust.”

Jérôme Policand, team manager, said: “We are very happy to welcome Tristan back after his strong showing on debut in 2012 when we claimed a top-10 overall finish.

“I’m confident that his experience acquired in IndyCar and as a Mazda driver in TUSCC, coupled with his natural speed, will make us contenders for a class podium.”