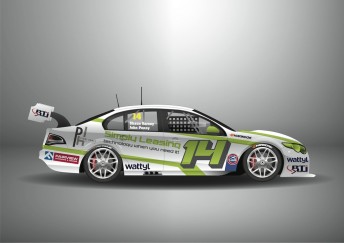 21-year old Auckland driver Shaun Varney will make his BNT NZ SuperTourer debut this weekend at the Rush Security Taupo 400, as he lines up on the grid for the first time in his Simply Leasing Ford Falcon.

For the last two seasons Varney has competed in the NZ V8 Touring Car championship, finishing third in the TL category (for the older cars) last year and fourth in TLX (the new-generation cars) earlier this year.

“I’d heard a lot of good things about the BNT NZ SuperTourers and the high standard of the drivers,” says Varney.

“I thought I’d give it a go and test a car to see how I liked it. I really enjoyed the car, so naturally I’m pretty excited to get behind the wheel at Taupo.”

“To be honest I don’t expect to go out there and win the enduro series by any stretch of the imagination. I want to get the feel of the car, get comfortable in it and try and learn as much as I can.”

Varney says it’s an exciting proposition to be able to mix it with international-standard drivers like the V8 Supercar racers who are coming across to co-drive with Kiwis in the endurance meetings.

“It’s an exciting opportunity. There will be a very high level of competition out there, so we’ll see how we go, against them. I think like in any race, if you can stay out of trouble, then you’re half a chance to nab a good result.”

Varney will partner the endurance races with John Penny who has competed in the category before.

Penny, a long-time Taupo resident who is now based in Auckland, says he enjoys racing the NZ SuperTourers and is looking forward to getting back to his home track.

“I’ll be racing on my home track and I’ve gone well there in the past. I moved to Auckland three and a half years ago but I’m still a Taupo boy.”

“The cars are fantastic, with great handling and braking. Greg Murphy showed at Pukekohe in April that they are only about a second a lap off the pace of the V8 Supercars. They are very exciting.”