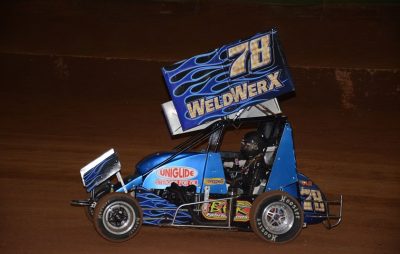 Another season of exciting action-packed motorsport entertainment draws to a close this Saturday night (June 2) at Ausdeck Patios Archerfield Speedway with the final meeting of the 2017/2018 season featuring a mixed program of open wheel and tin top racing. The show features Australian Championship events for Open Sedans and Ford vs Holden vs Sigma sedans, plus the final rounds of the Ian Boettcher Race Parts Wingless Sprint Club Championship and the Queensland Lightning Sprint Club Championship, along with Street Stocks, Junior Sedans, Stockcars and Modlites.

Having been pipped at the post in the recent 50-lap event at Archerfield when a last-lap pass saw him relegated to runner-up status, Brant Chandler will be revved for redemption in the Wingless Sprint season finale. He has been the most consistently quick driver throughout the season and will be hard very to beat if he brings his best form. Cody O’Connell, Josh Dreaver and Paul Robinson loom as the locals most likely to curtail Chandler, with Michael Butcher leading a quintet from south of the border seeking to give New South Wales the kind of success that they lack in their football endeavours.

No doubt the focus of the Lightning Sprint action will be the battle for club championship honours between Keith Blatch and Aaron Kelly. Whilst Jeremy Hassall was the feature winner at their last Archerfield outing and will most definitely be a contender again this weekend, Blatch and Kelly have been the standouts throughout the season and, with so much at stake, it is hard to imagine either of them allowing Hassall, or anybody else for that matter, to interfere with their club championship ambitions. Other potential spoilers, if they can find the consistency to match the glimpses of speed they have produced on occasion, include Jason Rae and David Van Vegchel.

The Junior Sedan events are looming as a true State of Origin battle with the 16-car field split evenly between the states. Local guns such as Cody O’Connell, Brad Pascoe, Dakota Laverty and Zac Pascoe will take on NSW hotshots that include Zac Youngberry, Connor Reeves, Ryley Smith and Josh Weir in a battle for state supremacy.

In the first appearance since their Queensland Championship event early in the season, Street Stocks have gathered 13 drivers to do battle, with Stock Cars also making a return after a lengthy absence with a 10-car field.

The Australian Championship for Open Sedans has attracted over 25 nominations and they will no doubt relish the opportunity to showcase their racing at the biggest event of the Open Sedan season. Category veterans Bob Ware and Wayne Kirkman will face off against the likes of Michael Taylor and Daniel Taylor in the A Grade ranks while, barring a major mishap, Ben Robertson seems almost certain to clinch the B Grade honours given his complete and utter domination throughout the season. Again it is the Taylors – Scott and Ben on this occasion – who loom as the biggest threats to a Robertson rout, with Ricky Price and Michael Cheeseman also likely to make their presence felt in the fight for a place on the podium.

Ford vs Holden vs Sigma sedans will also contest their Australian Championship event in which Matthew Hannigan and Jason Walsh will start favourites, with a small field of Modlites to complete a variety-packed program that also includes the annual Enduro and King of the Ring sedan events. Pit entry is from 1.00pm with main gates opening at 2.30pm. Racing kicks off at 3.00pm and is expected to be completed by 8.30pm.