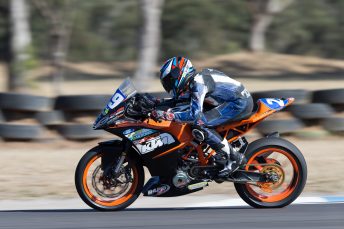 Race One got off to a clean start on favourable track conditions with the exception of Warrick Nowland (WNR, Kawasaki EX 300) who incurred a ten second penalty for a jump start. The front eight of the fully stocked grid making a quick break away from the group. The nine lap circulation quickly settled into an order made up of ‘Up to 300’ and ‘Over 300’ categories, as they sliced and diced for the duration.

Jack Mahaffy (JDS Moto, Yamaha YZF- R3) suffered a crash on lap six, but was quickly up uninjured and able to re-join the race. With no time at all separating the front runners, the fastest through the speed traps was Zac Levy (Puma RV’s, Yamaha YZF-R3), who was clocked at 163kph.

Billy Van Eerde (KTM Australia, KTM RC 390) was the fastest rider on track, finishing first in class, ahead of fellow ‘Over 300’ counterpart, Locky Taylor (Locky Taylor Racing, Yamaha YZF-R3). Zac Levy (Puma RV’s, Yamaha YZF-R3) came third to complete the the ‘Over 300’ podium for Race One of the class.

Quotes from the Riders:

“That was such a great race! I’ve just got my first win at ASBK! Just a massive thanks to my family and KTM. Now I know I can win a race in the ASBK Championship and want nothing more than to back it up tomorrow. I can’t wait!”

“So good to be here at Morgan Park Raceway and put on a show for everyone, especially those who come to support me. I could not do this without the help from all of my sponsors and would like to thank each one! The racing is fantastic, and all the boys are so close to each other. Let’s see what happens tomorrow.”

Reid Battye (DB Racing, Kawasaki EX 300) was fastest for the ‘Up To’ category. Oli Bayliss (Cube Racing, Kawasaki EX 300) took second place, leaving fellow competitor Lachlan Epis (Nextgen Motorsports, Kawasaki Ninja 300) third, ahead of Sunday’s two remaining races at 9:35am local time. The super tightly contested development or ‘feeder’ 300 categories will prove to be a spectacle, given the near capacity grid that will line up in the fight to turn one. The third race will commence at 2:45pm.

Quotes from the Riders:

“With such close elbow to elbow racing today, it could have been anybody’s race. All the competitors are so close. Let’s hope to bring it home tomorrow. BCperformance put together a great bike this weekend and I can’t thank them enough.”

“I got a bit of a bad start off the line, but had so much fun with the guys on track and I am looking forward to tomorrow!”

“I struggled in the start of the race but found my feet pretty quickly. It’s good to be standing on the podium.”