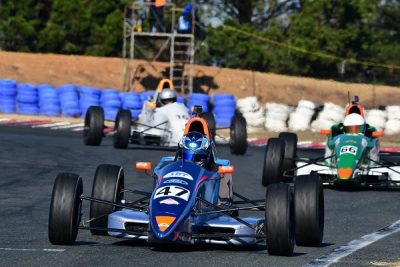 Young Formula Ford racer Tom Sargent has described his debut in the national Formula Ford Championship as a valuable learning experience, after recording mixed results in the weekend’s three races at Wakefield Park.

The race meeting started on a positive note, Sargent qualifying 10th before finishing 10th in Race 1, in the 33-car field.

Sargent was again running strongly in Race 2 before he tangled with another competitor, breaking the steering on his Tegra Australia/Sloanebuilt Trailers Formula Ford and forcing him into retirement.

Not to be discouraged, Sargent staged an impressive recovery drive in Race 3, charging from the back of the grid to 15th before the race finished under Safety Car conditions.

Sargent said the opportunity to race against the country’s top Formula Ford drivers was important for his driving development.

“I gained a lot of experience this weekend – the level of competition was very high, and I learned a lot by racing wheel-to-wheel with so many other cars,” Sargent said.

“The weekend started well – we had very good speed in qualifying, and to finish in the top 10 in my first national race was an awesome result.

“In Race 2, I made a couple of mistakes and unfortunately collided with another car, which broke the steering.

“The CHE Racing Team did a great job to fix the car and I was having fun overtaking people in Race 3. It’s a shame the race finished under Safety Car, because I felt like I could have made up some more places in the last few laps.”

Sargent and his team now face a short turnaround before his next racing event, which will be the South Australian Formula Ford Championship round at the brand-new Tailem Bend circuit this weekend.

“We’re going to run in the national Formula Ford round at Tailem Bend in August, so we’ve decided to race there this weekend, in order to learn the track,” Sargent said.

“From the photos, it looks like an awesome facility and I can’t wait to turn some laps there.”