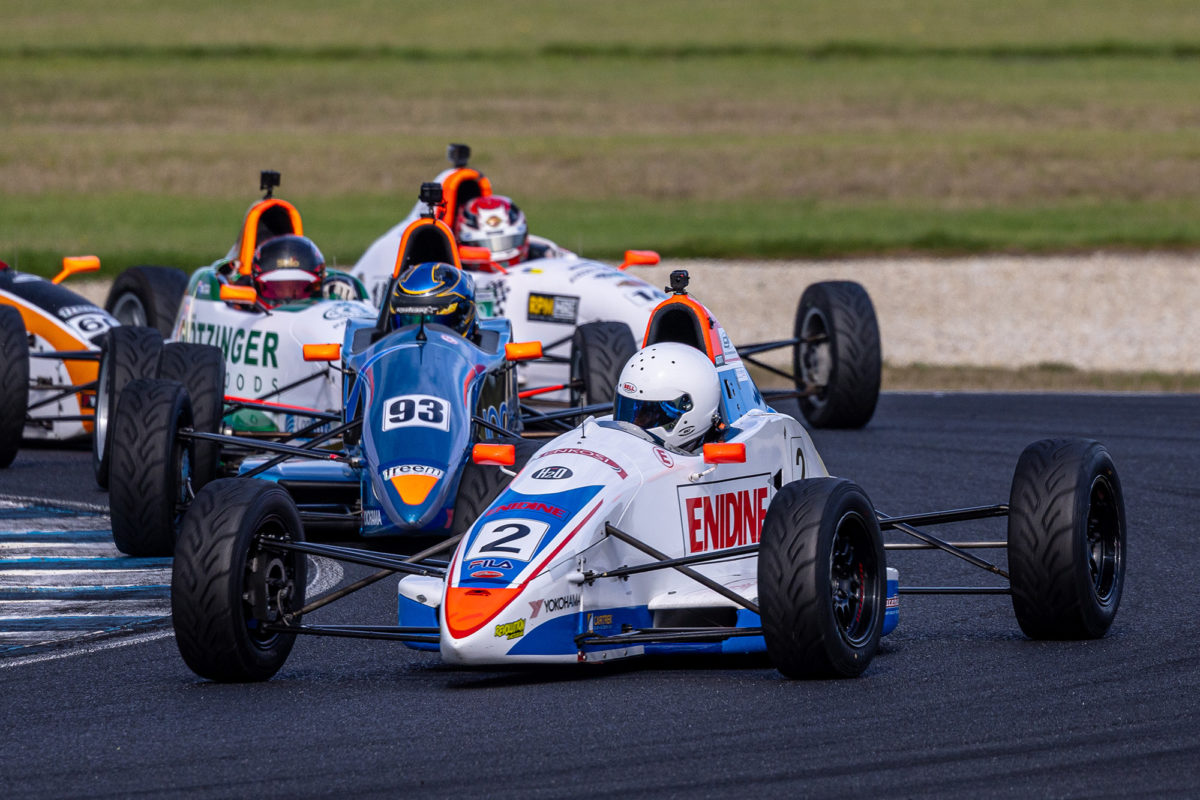 A breakthrough weekend for Valentino Astuti highlighted a successful weekend for Team Sonic at the opening Shannons Motorsport Australia Championships round at Phillip Island, encompassing Round 2 of the Australian Formula Ford Series.

Following a mixed weekend of results at the historic Sandown circuit for Round 1, Astuti and team-mate Winston Smith enjoyed a strong event at Phillip Island, which thrust the pair into contention for this year’s title.

Astuti experienced a remarkable weekend, taking his maiden pole, converting this into his first victory in the category, then backing this up in Race 2 as he battled rivals Jimmy Piszcyk, Cameron McLeod, Cody Donald, Smith and Jude Bargwanna in a titanic struggle.

In a mature demonstration, Astuti bided his time and completed a clean move late in the race to take his second win of the day.

Astuti completed the clean-sweep in Race 3 by the smallest of margins – 0.0046s – from Pisyczk in what was a stunning finish to the race and a perfect weekend following a difficult opening round at Sandown.

In a strong all round performance by the two Team Sonic drivers, Smith completed a front-row lock out and proceeded to battle for the lead alongside Astuti in both races. In Race 1, Smith finished third to score a double podium for the squad before an incident at Turn 1 in Race 2 dropped him out of podium contention.

A great comeback drive through the field gave Smith ninth, however his pace demonstrated when in clear air was impressive and emphasised what could have been.

The third round of the Australian Formula Ford Series will be held at Winton Motor Raceway as a support category to the Repco Supercars Championship.

“It feels pretty good to take a clean-sweep this weekend, especially after our unfortunate round down at Sandown,” said Astuti.

“Obviously, last year’s incident (roll over at Wakefield Park) wasn’t planned, so I’ve just lifted my head up since then and really focused on my craft and put it to use here at Phillip Island.

“Enidine has helped me out with getting on the grid this year, they’re a huge simulator company and they do a range of other things as well. Trevor there has been a big help, they’re really helpful and I’m grateful for them to be on the car.

“Winton is next, and hopefully it’s a strong round for me. We’re looking forward to it, being a Supercars round and Sonic also has their Porsches there as well so it should be good.”

“Pace wise we were probably one of the fastest, being unlucky in qualifying getting baulked up and lost 0.4s on our fastest lap so we lost the pole,” said Smith

“Race 1 was good, I got an average start but got back to third and showed really strong pace. Race 2 was awesome sitting second – again really fast – and then on the last lap, three-wide into one was never going to go. I was in the middle, got squeezed so that put us back to 15th and out of it which really made it a tough weekend.

“I think we did as much as we could considering it’s hard to get through at the start in the last race but just disappointed to not come home with good points and probably the win when we had the pace to.

“In my last race at Winton, I came second in every race behind (last year’s series winner) Tom Sargent, so I know we’re quick there.

“Hopefully that can generate a good run of luck and better results.”