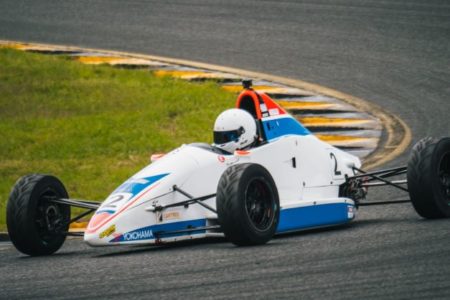 Following a severe incident at Wakefield Park earlier this season, a Go Fund Me page was set up to raise funds to repair Astuti’s Mygale.

Enough funds have been raised to repair the Formula Ford, with Astuti contributing to the repair of his chassis at the Sonic Motor Racing Services workshop.

“I just want to say thanks to everyone for supporting me through my Go Fund Me page,” Astuti said.

“Everyone’s support helped me eventually rebuild my car and putting it all back together following Wakefield Park.

“I’m very keen on competing this weekend at the final round of the national championship at Phillip Island.”

He will make his return at the final round of the Australian Formula Ford Championship held as part of the prestigious Island Magic meeting at Phillip Island where Sonic will run four entries for the first time since Wakefield Park.

Goodman is best placed of the Sonic drivers in third, just 10-points behind second placed Cody Burcher heading into the final round.