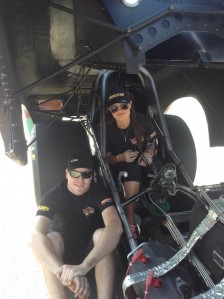 This Saturday (14 February), nineteen year old Chelsea Leahy will celebrate Valentine’s Day by making her competitive debut in the senior ranks of the Queensland Drag Racing Championship at Willowbank Raceway, as the championship kicks off with its first round of the year.

She will do so with the support and guidance of 2014 QDRC Champion (Knijff Earthmoving Modified) and boyfriend of eighteen months Rob Harrington, who in 2015 is taking time out from his own racing to support his girlfriend’s racing program while undergoing his own preparations for next season.

“I can’t think of any other way that I would prefer to spend Valentine’s Day than at the drag strip with my boyfriend,” said Leahy, who works in administration for her father’s Geezer’s Imports business and will compete in the Knijff Earthmoving Modified category.

“We met through racing and when I am not on the track I am there supporting his racing, and now this year he has taken some time off to work towards other racing projects and to help as crew for me in my first season. It is a really nice thing of him to do for me, he is helping a lot with me and my crew, and as the reigning champion for the bracket in which I am racing I feel very lucky to have his guidance and experience on my side.”

For Harrington, having a girlfriend that loves his sport as much as he does is a dream come true.

“I am really proud of Chelsea and all the strides she is making as she prepares to make her debut in the QDRC this weekend,” said Harrington, a 23 year old linesman from Karana Downs.

“It has certainly been a learning curve for her, but she is working hard at it and I can’t wait to see how she goes this weekend – and I can’t think of a better way to spend Valentine’s Day!”

Following a three year hiatus from racing after first taking the wheel at 15 years of age in Junior Dragster – during which she saved the funds to purchase her own front-engined, small block dragster from the United States – Leahy is looking forward to getting back on the race track.

“I have always wanted to race in the senior ranks since I finished racing in Junior Dragster. I asked dad (drag racing identity and Willowbank Raceway board member Greg Leahy) if I could get a car and he said I had to provide one for myself, so I saved as much as I could for three years and last year was able to buy my own dragster – I am pretty proud of that as I don’t think there are many 19 year olds around who own their own race car,” said Leahy, of Helensvale on the Gold Coast.

“The preparation since buying the car certainly hasn’t been easy for me, it has been a steep learning curve to get used to the car and how it runs and all that goes into successfully racing and running a car ourselves – but we are making steps in the right direction and I can’t wait to get on track this weekend.

“I am definitely excited, it has been a while since I was able to race so I am really keen to get back into it and get back behind the wheel again.

“It will be a learning process and I will be going up against people who are a lot more experienced than me, but I will be doing everything I can to be out there and trying my best for me, for my crew, and for my sponsors Geezer’s Imports and also Armor All.”