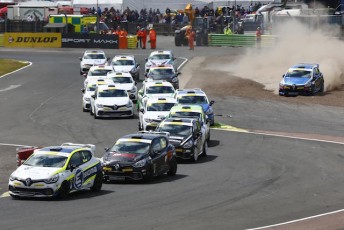 MEDIA RELEASE: After a long summer break the Renault UK Clio Cup returns to action this coming weekend (Sat 22/Sun 23 August) at arguably the most spectacular circuit on its calendar – Knockhill in Fife.

Knockhill marks the first two of eight races that will decide the outcome of the Clio Cup title and each driver is sure to start feeling the pressure soon. Adding to the tension is what winning the crown can mean with more than half the drivers on the grid in the star-studded Dunlop British Touring Car Championship (alongside which the Clio Cup races) having come from Renaultsport categories.

And whoever goes on to be crowned the 2015 Clio Cup Champion will win a test in Renaultsport’s sensational new 550hp R.S 0.1 sports/GT racer with the top two also getting runs in a BTCC car, courtesy of tyre supplier Dunlop.

And so to Knockhill which is notorious for producing drama aplenty: last year at the Scottish track Josh Cook saw a 48-point lead over Mike Bushell all but evaporate in just two days before the latter then went on a title-winning run of results (both are now on the BTCC grid).

This time around it’s much closer with 50 points covering the top four. In fact just five points separate leader Whorton-Eales and second-placed Hand with a maximum of 272 still to be played for (32 per win plus a bonus two for setting the race’s fastest lap).

While it might appear to be a four-way fight for the crown, there are plenty of other drivers who could have a say in the outcome – particularly as those at the head of the table perhaps begin treading more carefully on occasion in fear of tripping up at such a crucial stage of the season.

Exciting teenage talents Jack Mitchell (West Kingsdown) and Charlie Ladell (Ipswich) have both switched teams – to 20Ten Racing and WDE respectively – and are embroiled in a close scrap for fifth overall (both have shared the Graduates Cup class wins this season with Sutton).

For Knockhill, Cooksport has also lured back proven Clio Cup race-winner Lee Pattison who could be a thorn in the side of those involved in the title race…