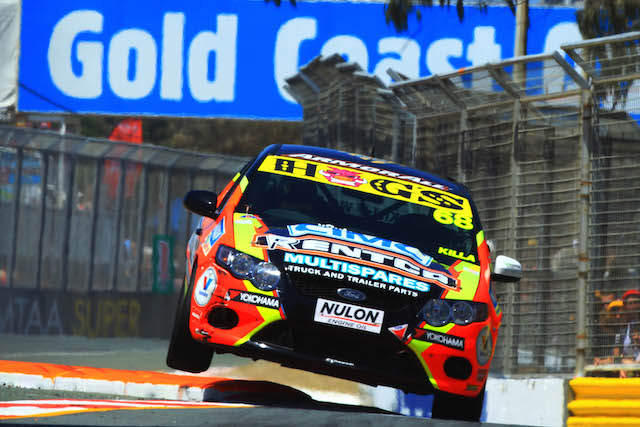 The Series kicked off at the Clipsal 500 in 2001 with only 9 Utes and since Gold Coast Company SPHERIX took over in 2006 the Series has had 16 Fords and 16 Holden’s at every round since.

This will be the 11th time the V8 Utes have competed around the streets of Surfers Paradise and Category Manager of SPHERIX Craig Denyer the man behind the initial idea of the Series and start up manager of local station Sea FM is looking forward to another brilliant round of racing.

“The Series has come a long way since its inception in 2001. Feeling that Australian Motorsport needed an entertainment category we, Ross Palmer, Ian McCalister and myself came up with the idea in 2000 and I couldn’t be happier with how the Series has developed over the years, not only is it still the top entertainment category but it has also become extremely competitive and is a feeder category into V8 Supercars, we love racing on the Gold Coast and no doubt it’s going to be a ripper of a weekend with plenty of action,” said Denyer.
36 races have been run and won at the Gold Coast event over the past 11 years and someone who knows all about the ups and downs is local driver and two-time champion Ryal Harris, having raced here seven times since 2005, he has won 7 races and two rounds at the event, racing both a Ford and Holden.

“I love the Gold Coast event, there is nothing like racing in front of a home crowd. The event and the Series has certainly changed a lot over the years and I keep coming back because I love it, I love racing the Utes, I love the category and I love the Gold Coast, lots of love,” he said with a grin.

Harris and fellow local racer Kris Walton are currently first and second in the ARMOR All Drivers Championship heading into the event and will be joined by Go Karting Gold Coast owner Cam Wilson who will take to the track at the event for the fourth time, he won a race on debut there in 2012 joining the Series full-time in 2013.

Unfortunately he didn’t have the best luck there in 2013 caught up in a huge accident in Race 3, which saw three Utes including his own with extensive damage, however he is determined to put in a big performance next week.

“It would be nice to relive our first race here and have a win, it’s been a long time between drinks, we didn’t have the best of luck the past few years but the car has shown great speed this year and hopefully we can pull it all together in front of a home crowd,” said Wilson.

Former Captain of the u/21 QLD Indoor Hockey Team and World Jet-ski Competitor Matthew Nolan will return to the Series for the first time this year, Nolan last drove at Sandown Raceway last year and has since become a father looking forward to donning the helmet once again.

“It’s good to be back in the Ute, I’ve had a busy year with the birth of Huxley (baby boy) and I’m really keen to get back into racing, especially at my home track, the family will all be around to watch as well,” said Nolan.   Peter Burnitt will also return to the event for the sixth time along with fellow Queenslanders Ryan Hansford (Brisbane) and 17year old Bundaberg driver Mason Barbera.

The V8 Utes will take to the track on Friday, 23rd October for three sessions.   See below full schedule for the weekend