V8 Ute Merchandise on sale at the Deniliquin Ute Muster

V8 Ute Merchandise on sale at the Deniliquin Ute Muster 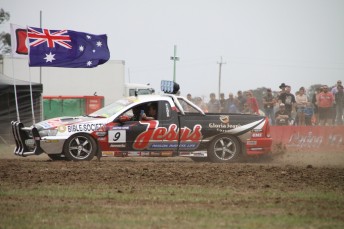 The V8 Ute Racing Series official merchandise will be for sale at all V8 Ute Rounds, with the truck also joining the V8 Ute Bandwagon as they head to the 2014 Deniliquin Ute Muster Friday, 3rd & Saturday 4th October.

This is the first time since 2009 the V8 Utes have had a fresh apparel look and merchandiser Nigel Benson is excited to be involved.

“I’m really enjoying being involved with the Ute Series. We’ve had a lot of fun designing the Merchandise and we’ve even made up an exclusive ‘Work Hard, Play Even Harder’ singlet and Hat especially for the Deni Ute Muster,” said Benson.

Benson will join Williams Race Tech, Jesus Racing and Just Car Insurance Racing at the Deniliquin Ute Muster with Drivers Andrew Fisher and Elliot Barbour on hand to assist with the judging of the Holden Barrel Races, Go to Wo and Circle Work competitions.

You might even catch a glimpse of the B&S Jesus Racing Ute as it heads out for a demonstration in the Circle Work Arena. 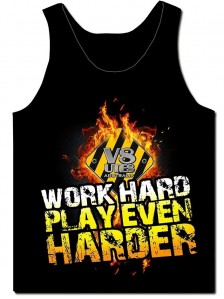 This will be Fisher’s fourth time at the event and he can’t wait to hit the Muster.

“We’ll be doing the circle work demo again this year and we’re really looking forward to it but let’s hope there’s not too much circle work at Bathurst.

“We just love the interaction with guys down there and they love us now. The Jesus racing Ute features on their TV advert this year, they love what we do as part of our engagement with them and the fact we did our Ute up B&S style, it’s just great to go down and be a part of it. It’s our support base down there (Ute lovers) so it’s great to have the V8 Ute Category involved,” said Fisher.

Unlike Fisher, this will be Elliot Barbour’s first time at the event and he’s not quite sure what to expect.

“It should be pretty cool, I’ve heard big things, I heard it can get pretty wild so it should be fun. I’m looking forward to the Go to Wo competition, I did it in an AMG car in the snow so I’m pretty comfortable with it,” said Barbour.

Following the Deniliquin Ute Muster, the Merchandise Truck will follow the V8 Ute drivers to Round 6 of the 2014 Australian V8 Ute Racing Series – fuelled by Hogs Breath Café at the Supercheap Auto Bathurst 1000.

To find out more about the V8 Ute Merchandise head to www.v8utes.com.au and follow the merchandise link.