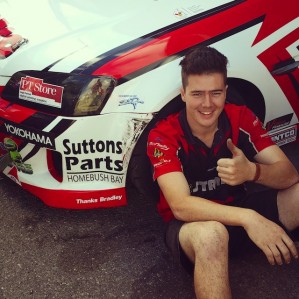 MEDIA RELEASE: V8 Utes – The 2014 V8 Ute Racing Mechanic of the year Bradley Packham has landed a job with Lucas Dumbrell Motorsport, the New South Welshman is the third mechanic/ engineer from the Sieders Racing Team to move into V8 Supercars in recent years.

Luke Sieders Team Manager of Sieders Racing Team although sad to see him leave is really excited for the 21 year old and believes it’s an important step in any young engineer’s career.

“I try to foster talent not only in drivers but also with the crew as well, he’s come along way Bradley, he’s really talented, which was evident when he won Mechanic of the Year last year and I have no doubt he’ll do really well,” said Sieders.

Lucas Dumbrell Motorsports V8 Supercar Driver, Tim Blanchard, was really pleased with how his number two mechanic went at his first Round at Winton Raceway over the weekend.

“He went pretty well, obviously a bit of a different environment being in V8 Supercars but he adapted really well and he’s fitting in really well with the team. We have a few guys from the Utes working with our team now, Brett & Darren Williams (former Williams Race Tech) as well as Nathan (Pekolj) we all seem to have been involved with the Utes previously in one way or another,” the former V8 Ute Wildcard driver said.

After attending the 2011 Bathurst Event where his father’s company sponsored George Elliots Race Ute, Packham fell in love with the sport. Only four years since, he was approached by Lucas Dumbrell Team Manager Barry Hay after a recommendation from former Sieders Racing’s Data Engineer, Nathan Pekolji also working with the team and Packham loves every minute of it.

“The first race meeting was an awesome experience, there’s so much work put into the car to have that edge because Supercars is within a second from first to last. There’s a new group of guys in this young team striving to achieve, in a way, punching above our weight,” explained Packham.

Packham would love nothing more than to continue his career in top level motorsport.

“My goals are still unplanned yet but I would love to go to Europe running the ranks there and getting into F1 as a mechanic. Or to study mechanical engineering and see where that takes me, I’m not sure as yet but I know Sieders Racing and now Dumbrell Motorsport is all an amazing stepping stone, I would never have imagined four years ago that I’d be here today, so I know anything can happen if you work hard,” he said.

Packham worked on Stratco Racing’s Rhys McNally’s Holden, which only narrowly missed out on Podium finishes the past two years and he will really miss having the young-gun working on his car.

“It doesn’t just come down to the driver it’s a full team effort putting a championship together Brad was there through it all and he will be missed, he helped keep me under control and I don’t think we had any mechanical issues on track, he put in a great job and worked really hard and this is a really good step in his career.

“I’ll have Warren Espie working on the car now, it will be a big change from one of the younger guys to a more experience mechanic, he came in to Barbagallo and he and Brad were both working with me, I’m sure we will get along fine and I’m looking forward to Darwin,” explained McNally.

McNally and the rest of the Sieders Racing Team will be back on-track at Round 3 of the East Coast Bullbars Australian V8 Ute Racing Series at Hidden Valley Raceway, Darwin 19th – 21st June.