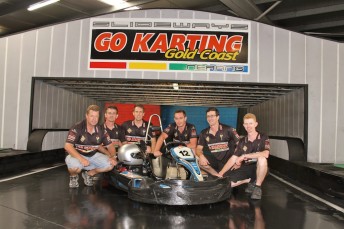 One Guinness World Record is not enough for Gold Coast V8 Ute driver and owner of Slideways Go Karting Australia Cam Wilson, who in February will attempt to add to his previous record for the greatest indoor go karting distance travelled in 24 hours with a team attempt.

His quest to set a new record for “Karting – Greatest distance travelled in 24 hours indoors (Team)”, which he will endure alongside five Slideways teammates from 17-18 February, endeavors to raise money for a charity close to his heart, Huntingtons Queensland.

Sponsorship and donation opportunities are available now to support Queenslanders impacted by Huntingtons disease, a neurological, hereditary disorder that affects a person’s ability to talk, think and move, leading to cognitive decline and mental health issues.

Cam tragically lost his father Murray to the disease earlier this year and lives with the 50 per cent prospect he has inherited the defective gene.

Huntingtons Queensland provided ongoing support to the Wilson family over the 10 years following Murray’s diagnosis, and Cam is determined to give back as much as he can.

Go Karting Brisbane, and raised over $20,000 for Huntingtons Queensland.

At the 2015 record attempt to take place at Slideways Go Karting Gold Coast at Nerang, Cam and his team aim to more than double Cam’s previous fundraising tally, with their target set at $48,000.

Although having the boasting rights for two world records will be a huge feat, Cam said raising awareness and funds for Huntingtons Queensland would be the most rewarding part of the challenge.

“Claiming a second world record will just be a bonus knowing the difference the money we raise will make to the lives of Queensland families coping with the detrimental effects of Huntingtons disease,” he said.

“The 24 hour record attempt is physically grueling and an enormous challenge but equates to nothing compared to what is experienced by those diagnosed with the condition.

“I’m lucky to have the Slideways team behind me who are just as determined as I am to set a new world record.”

With the event less than three months away, sponsorship opportunities are now open and donations are also being collected.

“We are asking for the public to dig deep and give what they can to support a great cause. Any donation, whether it be big or small, gets us closer to our fundraising goal,” Cam said.

All companies, businesses and members of the public are welcome to donate, however there are special corporate packages on offer including company signage around the track, donation of auction items and branding on the drivers’ race suits.

All donations over $2 are tax deductible and can be made at https://give.everydayhero.com/au/slideways-go-karting-gold-coast or through any of the Slideways Go Karting Australia locations in Eagle Farm, Pimpama and Nerang.