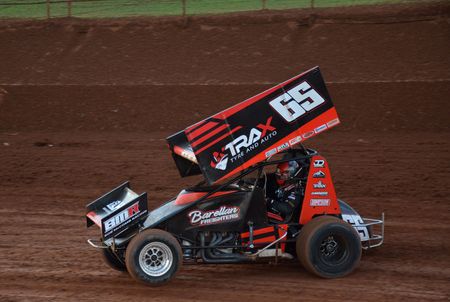 So far this season at Archerfield, only six different drivers have featured on the podium in Sprintcar feature race competition and, of those, Lachlan McHugh has been the standout performer with three wins from four starts, his only glitch coming in round two of the ECL Track Championship when he crashed out after tangling with a lapped car. Having also accrued two feature race wins in Toowoomba so far this season, plus a runner-up result there last Saturday night, McHugh is very much the favourite heading into this weekend. The only other driver to visit victory lane this season has been Cody Maroske, with victories in both Brisbane and Toowoomba, the latter of which resulted, for the first time this season, in McHugh going the distance without emerging victorious.

Callum Walker was sensational in the previous round of racing here two weeks ago, clocking fast time in qualifying and then backing up to finish second in the feature race behind McHugh and ahead of Luke Oldfield, whose third-place result was actually his worst of the season, having somewhat remarkably finished second in every other feature race since the season commenced. Aaron Kelly has also featured on the podium this season and, as the defending track champion, he will be very keen to take the next step and snare a feature race win to bolster his title defence. Meanwhile, Mitchell Gee has finished in the top five at Archerfield on two occasions this season and brings some form into the fight, fresh from a third-place result in Toowoomba. The only other drivers to score a top-five finish across the opening five nights of Sprintcar action are Brent Kratzmann and Randy Morgan, both of whom are also in the field this weekend.

Despite a later start to the season, Dirt Modified competitors have obviously felt the impact of recent events harder than others, with just 12 nominations for their first appearance, a field that might be smaller still if not for the efforts of Australian champion Kevin Britten taking on the challenge of competing in both Sprintcars and Dirt Modifieds on the night. Although down in numbers, when a third of the field are national championship winners in the category, we can still expect to see plenty of action as Andrew Pezzutti, David Clark and Mark Robinson, who is fresh from a feature win in Grafton last weekend, look to upstage Britten and the rest of the runners.

As has consistently been the case for some time now, AMCA Nationals have gathered a solid field – both in quality and quantity – for their third round of racing, with Bruce Marshall, Steve Potts and Steve Price all enjoying recent success. Marshall won the opening round here in October and subsequently finished third in the Queensland Championship before collecting another feature win in Grafton last Saturday night, while Price achieved an identical result the previous weekend at Lismore in the wake of a barnstorming run from the rear of the field to the podium in the previous Archerfield track championship round. It was Potts who prevailed over Price in round two and, whilst the battle between these three is expected to produce plenty of highlights, the likes of Nathan Tomkins, Russ Hardy, Michael Denning and Scott Hitchcock are certainly capable of mixing it up at the front of the field.

In the absence of both Kristin Brown and Tarhlea Apelt from the field, round three of the Done Right Paint Worx Formula 500 Series will see Libby Ellis singlehandedly taking on the boys, with Liam Williams and James Kennedy expected to continue their rivalry. The last round saw Kennedy in a winning position until he was forced to the infield, handing the lead to Williams, who backed up to defeat Kennedy last weekend in Toowoomba, reversing the result from earlier in the season. Ryan Newton, Brady Argles and Brock Thornton seem the most likely to pounce should the favourites falter, as they did in the first round when some restart nonsense resulted in both Williams and Kennedy missing a place on the podium.

A dozen duellists will face-off in Compact Speedcar competition as former New Zealand Midget champion Michael Kendall chases his third consecutive feature race win. Should Kendall, who has also been a dominant figure in Midget competition at Archerfield, see off the youthful threat posed by Bodie Smith, Harry Stewart, and Connor McCullough, he should find himself well on track for the trifecta.

Gates open at 1.00pm for competitors and online ticket holders only, with general admission ticket sales and entry from 3.00pm. Early racing will hit the track from 5.00pm and the main program, which will also feature two divisions of racing in Open Sedans, will get underway from 6.00pm.