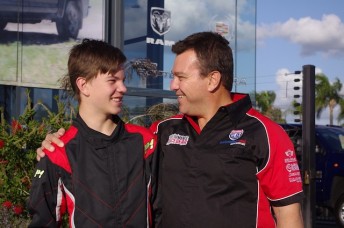 MEDIA RELEASE: national – Alex Rullo will line up against his biggest supporter in round two of the 2015 Kumho Tyres Australian V8 Touring Car Series from June 12 – 14.

The Perth teenager, who turns 15 on June 15, will compete against his dad Peter at Winton Raceway in Victoria.

“It’ll be great to have Dad there not just in the team, but on the track as well,” Alex said.

The youngster, who likes his chances against the ‘old man’, is well-prepared for the event having spent two days testing at Winton recently.

“It was great to get a feel for the track,” Alex said. “I’m feeling pretty confident now.”

“The team analysed a lot of data and gave me some great advice about how I could improve my times.”

“I’ve also been watching a lot of footage from other drivers at the track,” he said.

For Alex, the Winton event is a chance to make up for a difficult start of the season.

At Sandown in March, he qualified a respectable fourth but recorded DNFs for both races. In the first, his Falcon developed an engine issue on lap one, while in race two he was involved in a three-car incident at turn one.

Alex hopes he’ll be able to show off his talent at Winton.

He and dad Peter will drive matching BF Falcons run under the MW Motorsport team banner.

Peter said he’ll be fine if Alex beats him in competition: “I just want to keep him honest and I hope he’ll have more success than his first outing at Sandown.”

Practice for the event kicks off on Friday, June 12 with qualifying and race one Saturday 13. Race two and three will be run on Sunday 14.