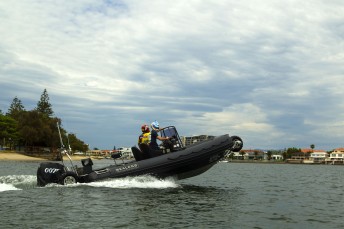 Walton and Harris out on the water

MEDIA RELEASE: Gold Coasters and V8 Ute Champions Kris Walton and Ryal Harris took to the Broadwater in the Sealegs 007 amphibious floatable boat, today (Thursday, 22nd October) before hitting the track for the Penultimate Round of the 2015 East Coast Bullbars Australian V8 Ute Racing Series at the Gold Coast 600.

Two-time V8 Ute Champion (2012/ 2013), Harris will celebrate his 250th Race this weekend and couldn’t think of a better way to kick-start his race weekend then heading out on the water for a bit of fun.

“It was good fun, every year at the home round we get to do some cool stuff but that was definitely the coolest thing I’ve done by far, the Sealegs boat was awesome to drive on land and in the water I thought that was something I’d never get to do,” said Harris.

Managing Director of Sirocco Marine North Dylan Lopez, who supplied the 007 Sealegs Amphibious floatable boat will be backing Harris this weekend and enjoyed seeing the drivers enjoy the boat before hitting the track.

“The 007 is the world’s highest performing amphibious boat catered for recreational commercial and government usage and it was great to have the boys in it today.

“We’re backing Ryal this weekend because the proofs in the pudding we’ve seen him become a champion for the past few years now and would love to see him come up through the ranks and become a V8 Supercar Champion,” explained Lopez.

Harris and Walton are currently one/two in the ARMOR ALL Drivers Championship Harris leading the 2014 Champion Walton, by 77points and will be watching his back this weekend.

“It’s going to be a close weekend, the next two rounds will be on between the two of us,” said Harris.

“We are friends off the track but on the track as long as we show each other respect we’ll be fine, it’s probably the most important round of the two left and if we can get a solid lead coming out of this weekend to lead into Homebush that would be great but it’s easier said than done.”

Harris has the best track record at the Gold Coast event with three podiums (round wins in 2011 and 2014 and a second in 2013), one Pole Award and seven race wins under his belt.

Although Walton is coming off a round win at the Bathurst 1000 event last week, he is yet to win a race or stand on podium at his home round and is hoping this will be the one.

“It was good fun, a bit different driving a boat around on water and land; it was a good warmup for this weekend. It’s a lot better feeling coming into this round chasing the title then the other way round,” added Walton.

Last year we were in Ryals’ position, I think he will be pretty conservative and we hope he will make a mistake, we’ll go out there and try and get this round win and keep our winning streak going.”

Harris and Walton will join the rest of the field on-track tomorrow morning for their one and only practice session at 8:20am, which will be televised live on Fox Sports.