US starts on their way for Brisbane Jamboree

US starts on their way for Brisbane Jamboree 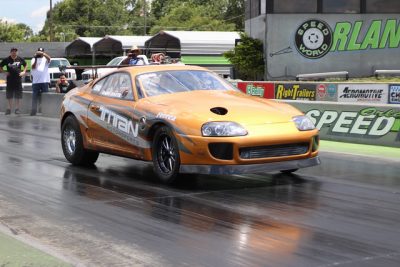 The hugely anticipated arrival of Titan Motorsports for the Honeywell Garrett Brisbane Jamboree presented by Link ECU and Tuners Edge is one step closer with the two-car team’s extreme machines now on the water on their way to Queensland from their base in Orlando, Florida (US).

Titan Motorsports’ infamous Copper Toyota Supra and Toyota Camry are expected to arrive in Australia on August 9. Their star drivers – sport compact world number one Garry White and popular sports compact personality Gabriel Rodriguez will touch-down in Queensland two weeks later just in time to unveil their much-respected machines at a special Jamboree launch night on Monday the 20th of August before they take to Willowbank Raceway for three days of testing ahead of the August 25/26 event.

White has been part of the Titan Motorsports team for almost 20 years is perhaps best known these days as the pilot of the quickest sport compact car in history – the 5.72 second/255mph Ebrahim Kanoo Toyota 86. The Huntsville, Alabama resident says he cannot wait to race the Supra in the J275 class in Australia in a month’s time.

“The Jamboree is a fantastic event. We’ve attended multiple Jambos and find it to be the best event in Australia and New Zealand,” White said.

“The fanbase makes Jambo a unique and wonderful event to attend and race at. We are excited to bring the Titan Motorsports Toyota Supra to Jamboree and hope to set new records. The crew has rebuilt the car to top standards and this is going to be a very exciting event.”

For Rodriguez, the chance to compete at the Honeywell Garrett Jamboree in Australia was one he couldn’t pass up.

“It has been my dream to come to Australia and race, so when Jamboree director Collin Willshire mentioned us coming, we jumped at the opportunity,” Rodriguez explained.

“We are hoping to run consistent ‘fives’ at Jamboree as we’ve done in the States; it will be exciting to show what Titan Motorsports has done and continues to do in sport compact racing.”

Already the excitement around the impending arrival of these machines and their star drivers is building in Australia for sport compact fans all over the country.

“If you mention the ‘TITAN Copper Toyota Supra’ to anyone who follows sport compact racing, you will see their eyes light up. This car was a real game changer in the early days of NHRA Sport Compact, TX2K and the NOPI drag racing series. This is probably the most famous sport compact of our generation.” Honeywell Garrett Jamboree Event Director, Collin Willshire, said.

“While it might not have been raced for a couple of years, it remains a true icon of our sport and with some 2018-spec upgrades freshly installed, including a monster 98mm Precision Turbo, FuelTech ECU and Liberty Xtreme transmission. I for one cannot wait to see what she can do with the world’s number one sport compact driver, Garry White, at the wheel in the J275 class.

“The Titan Motorsports Toyota Camry is no shrinking violet either – this monster 2JZ-powered machine has run 5.79 seconds at 252 miles per hour and will be hard to beat in Factory Xtreme.”

For more on the Titan Motorsports line-up at the Honeywell Garrett Brisbane Jamboree presented by Link ECU and Tuners Edge, please click here or visit www.titanmotorsports.com

About the Honeywell Garrett Brisbane Jamboree presented by Link ECU and Tuners Edge:

The Honeywell Garrett Brisbane Jamboree presented by Link ECU and Tuners Edge is Australia’s premier sport compact drag racing and car culture event. It will hit Willowbank Raceway across August 25-26 with hundreds of incredible vehicles on display and competing for the most coveted award in sport compact drag racing, the fabled ‘Billet J’ trophy. Across both days there will be action aplenty both on and off the track, with not only plenty of intense racing taking place across the quarter-mile but also plenty to see and do around the venue including a Shannons Show-N-Shine, Sound Off, Dyno and Drift Exhibitions, Babe and Bikini Comps, Trader Stalls, Kids’ rides and lots more.