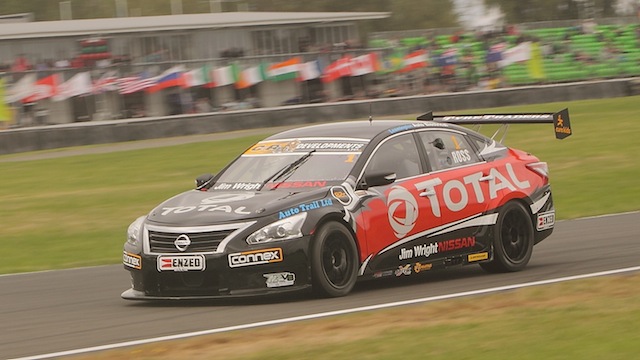 “The extra cars will either work for us or against us we just don’t know but I’m looking forward to getting back in the car and racing.” said Ross. pic: Little Devil Motorsport Media

The weekend of 11-12 April brings the NZV8 Touring Cars together again for the final round of the 2014-15 season held at Pukekohe Park Raceway.

Nick Ross and the Concept Motorsport Team have put in yet another stella effort throughout the season and, like last season head to the final in second place behind Australia’s Jason Bargwanna but within reach of the title.

Campaigning the brand new Total Lubricants Nissan Altima over this season the team and driver have held on to second place as they work toward realising the full potential of the new car.

This time last year it all went down to the wire when at Pukekohe Ross came from second place and won the title over Bargwanna only in the very last race of what became a very exciting weekend.

Ross will definitely have his work cut out for him this time around however with a gap of 158 points to close in on the Australian in just three races but the Nissan driver is not one to say it is over until it most definitely is.

Ross sits in second place ahead of Hamilton’s Lance Hughes who has 759 points to his 936 and Bargwanna holds the lead on 1094.

The NZV8 Touring Cars head to Pukekoke Park Raceway this month in an unprecedented situation where after months of negotiations the NZV8 Touring Cars TLX category will join with cars and drivers from the V8 Supertourers on the same track racing side by side.

“Any racing is going to be good for entertainment value and for the sport. The extra cars will either work for us or against us we just don’t know but I’m looking forward to getting back in the car and racing.” said Ross.

The merging of the two classes at Pukekohe will not only bring brand new excitement for the fans but at the same time throw up all manner of uncertainties for Ross as he goes head to head with Bargwanna and the other TLX drivers while battling amongst a new pack of cars.

There will be no attempt to achieve any terms of parity between the two different classes of cars before their historical appearance racing together at this round.

“I have no idea at all how it will go but for the betterment of the sport we have decided to put all the V8s on the track at the same time in the same race. We have all winter to sort out the parity.” said Ross.

Lower Hutt driver James McLaughlin will again be in the Concept Motorsport Holden Commodore TLX at the final round in Pukekohe after showing much potential at Manfeild in February.

McLaughlin is expected to campaign a full season in the NZV8 Touring Cars TLX over 2015-16.