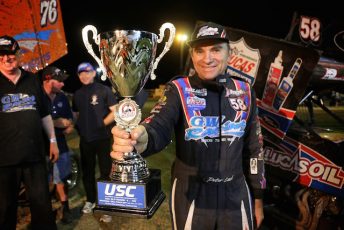 MEDIA RELEASE: After 3500 people packed the venue last season for the inaugural Ultimate Pink Night, Toowoomba’s Hi-Tec Oils Speedway management are bracing for the event to expand to the next level as fans and racers join forces to “Help Drive Out Breast Cancer.”

“We’re preparing for the biggest crowd of the season,” said events manager, Ben Bishop who was adamant that the Toowoomba public love supporting good causes.”

“The response we received to the concept last year was overwhelming as we welcomed women of all ages for free into general admission and then raised over four thousand dollars for Pink Ribbon. The place was packed, the atmosphere was fantastic, the racing was amazing and Toowoomba demonstrated why they are one of the most generous and genuine communities in the nation.”

Headlining the event will be the second running of the Will Power 500 as part of the Ultimate Sprintcar Championship, along with Super Sedans and Legend Cars.

“The Will Power 500 is the one they all want to win and Withcott’s own Peter Lack is the defending champion, so he will have 19 other hungry rivals keen to take it off him as the speedway community honours Toowoomba’s own Indycar World Champion, Will Power at a venue that is 500 metres above sea level. It’s going to be insense!” Mr Bishop said, also adding how he was amazed by the number of people at the inaugural event who were not classified motorsport fans.

“We had so many people contact us and tell us how they’re weren’t even interested in motorsport prior to this event, but they loved the atmosphere and the racing and are now hooked, so we can see this becoming a major event on the Toowoomba calendar. The canteens and bar will be stocked in readiness for a big crowd so we can’t wait.

Women of all ages as well as all children twelve and under are welcome free for this Saturday only, with gates open from 3pm, with action from 5pm, and Sprintcars from sundown.

For more details, check out www.toowoombaspeedway.com or the Hi-Tec Oils Speedway facebook page.