Ulrich Fritz: ‘We want to pull off the treble – and that includes the drivers’ title’

Ulrich Fritz: ‘We want to pull off the treble – and that includes the drivers’ title’ 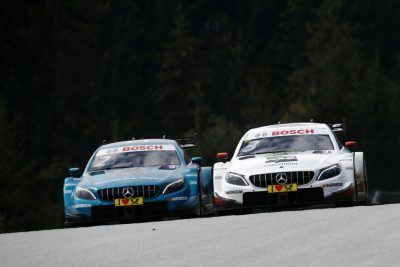 Mercedes-AMG Motorsport clinched two of the three titles in the 2018 DTM season at Spielberg. Team boss Ulrich Fritz reflects on the race weekend and tells us about the work that has to be done between now and the grand finale.

Russia, here we come: Next weekend, Sochi will be hosting the Russian Grand Prix for the fifth time. The Sochi Autodrom has so far been a happy hunting ground for the team from Brackley, who have won all four races so far staged there. The first two were won by Lewis Hamilton (2014, 2015), followed by one victory each for Nico Rosberg (2016) and Valtteri Bottas (2017); the win for the Finn was his first in Formula 1. The Silver Arrows also have a formidable record in qualifying at the venue where the 2014 Winter Olympics were staged: Lewis secured pole in the debut year while Nico was fastest in the 2015 and 2016 qualis.

Stat-Attack – Spielberg: No Mercedes-AMG Motorsport driver had made it onto the podium at Spielberg since 2015, but that was to change last weekend. As in Race 2 in 2015, it was Gary Paffett who lifted a trophy on Sunday. Although the team yet again came away without a race win and had only the one podium finish to celebrate in Austria, there were nonetheless two causes for satisfaction as well as a number of reasons to step up the work rate ahead of the season finale at Hockenheim. While the situation in the drivers’ championship remains tight, with only four points separating Paul Di Resta and Gary Paffett ahead of the final weekend, a couple of matters were settled at Spielberg: Mercedes-AMG Motorsport has won both the team and the manufacturers’ titles as its 30-year history in the DTM comes to a close. The double was first completed in 1991. Affalterbach and Stuttgart have been the destination for the manufacturer’s title and team title on seven and fourteen occasions respectively. One issue remains unresolved: which of the three Mercedes-AMG Motorsport DTM Teams will win the championship in the end? No team from any other manufacturer now has a chance of taking this particular title.

500th Formula 3 victory: Mick Schumacher registered not only his fifth consecutive victory in the Formula 3 European Championship at Spielberg last weekend but also made the occasion a very special milestone for the brand with the three-pointed star. Mick’s victory in the first race on Saturday was the 500th Formula 3 victory for a car powered by a Mercedes engine. Included in the reckoning are the German, British, Australian and European championships plus the Formula 3 Grand Prix in Macau and the F3 Masters at Zandvoort. The first Formula 3 engine (M271) from Mercedes-AMG was developed from the production engine of the C-Class and E-Class models. It made its race debut in the inaugural fixture of the German Formula 3 Championship at Hockenheim in 2002. In the 2014 season, it was succeeded by the F3 414, a four-cylinder direct injection engine with two-litre displacement.

Below are ten interesting facts, figures and milestones about Mercedes power in Formula 3:

Title success in the ADAC GT Masters: The season finale at the Hockenheimring was unforgettable in terms of drama. The first memorable moment came in Saturday’s race when Maximilian Götz and Markus Pommer (both GER) in the number 47 Mercedes-AMG GT3 finished fourth and secured the team title for MANN-FILTER Team HTP Motorsport. At the same time, the duo moved into a promising position in the battle for the drivers’ title. The situation looked even better after qualifying on Sunday when Götz booked himself pole position for the last ADAC GT Masters race of the season. At the start of the race itself, however, championship ambitions were dashed when the yellow Mamba with Götz at the wheel was pushed into the gravel on the first corner by a car that didn’t even have a stake in the title fight. Through no fault of his own, the veteran from Würzburg was out of the race. The all-German pairing, who had recorded one victory, one P2 and two P3s in the course of the season, thus ended the campaign in a disappointing fourth place. Their team-mates Maximilian Buhk (GER) and Indy Dontje (NED) meanwhile staged an impressive charge through the field in Sunday’s race: from 17th on the grid, they battled their way through to third place and to fifth place in the 2018 drivers’ championship. 25-year-old Dontje also finishes the season as third in the Junior classification. The Top Ten of this category for talented young drivers also features Luca Stolz (GER) of Mercedes-AMG customer team Zakspeed BKK Mobil Oil Racing in eighth place. Zakspeed finished the campaign eighth in the team standings. In 16th place were the Customer Racing team of AutoArena Motorsport, who had the satisfaction of a podium finish at the Hockenheimring: Patrick Assenheimer (GER) and Dominik Baumann (AUT) took third place in the Junior class on Saturday.

Overall and class victory on the Nordschleife: Hubert Haupt and Manuel Metzger (both GER), who were victorious in the fifth VLN race of the season, repeated their success in the seventh round of the season, this time partnered by Maro Engel (GER). The BLACK FALCON trio started the four-hour race from third on the grid and then applied canny strategy: unlike the other favourites in the running, they pitted relatively early on, thereby keeping the number 6 Mercedes-AMG GT3 out of the time-consuming battle between the two front-runners and subsequently enjoying a traffic-free track. The strategy paid off, and after 28 laps of the Nürburgring Nordschleife, Haupt driving the final stint took the chequered flag in first place. Team-mates Stefan Karg, Fidel Leib and Moritz Oberheim (all GER) also celebrated their latest success of the season at the wheel of a Mercedes-AM GT4: after BLACK FALCON Team IDENTICA won the SP10 class in rounds one and four of the VLN, the trio again secured the class victory last weekend.

First GT4 title in the British GT Championship: The Mercedes-AMG GT4 has won a title in the British GT Championship at the first attempt. Nick Jones and Scott Malvern (Parker Racing) finished top of the Pro-Am class on the final weekend of the campaign which was hosted by Donington. There were a total of nine races during the season, of which two ended with class victories for the British driver pairing. Lee Mowle (GBR) and Yelmer Buurman (NED) driving a Mercedes-AMG GT3 entered by ERC Sport secured one overall victory and made two podium appearances to finish fourth in the general classification.

International class wins and podiums: Reinhold Renger (GER) scored vital points towards the GT4 drivers’ championship in the penultimate event of the 2018 Blancpain GT Series Asia, also posting a class victory in the first race at the Shanghai International Circuit together with team-mate Rick Yoon (KOR). Renger goes into the last two races of the campaign at Ningbo International Speedpark (13th/14th October) with an eleven-point lead. Patric Niederhauser (SUI) is currently second in the GT3 classification. With a deficit of only twelve points on the leader, the GruppeM Racing Team driver is still in contention for the drivers’ title in the Blancpain GT Series Asia. Erik Behrens and Pontus Fredricsson (both SWE) driving a Mercedes-AMG GT4 made two podium appearances on their debut in the Swedish GT at Mantorp Park; the duo finished the two races in third place and on both occasions were winners in the GTB classification.

Uli, the manufacturers’ championship has been won, the team title is destined for one or other of the Mercedes outfits, and yet there were few happy faces to be seen at Spielberg.
Ulrich Fritz: We were of course all delighted to have secured those two titles. But the most important trophy in the DTM is the drivers’ title. Unfortunately, we lost ground in the battle for this one. It was partly due to the fact that Audi have been getting stronger in recent races, but also to some extent because of our own performance. But such setbacks are part of the sport. I would also expressly warn everyone against talking the team’s prospects down or getting into any sort of negative spiral. If you look at the manufacturers’ standings, it has to be said that we have been dominant this year. At Spielberg too, we were on pole twice and at least got onto the podium. In Paul and Gary, we have two Mercedes-AMG Motorsport DTM drivers occupying the first two positions in the championship table. We’ll be going to Hockenheim leading on points, and you cannot do that in the DTM if there is something not working in the team.

There was a lot of debate in social networks at the weekend about the Audi tactics, but also about your pit stops.
Ulrich Fritz: Let’s start with Audi. I can understand that the fans weren’t enthusiastic. Nor were we. On the other hand, tactics of this kind are also part and parcel of the DTM. We gave similar support to Pascal in his 2015 title bid. I think it’s important to be open about it. We did that in 2015, and Audi did the same at the weekend. At the end of the day, the DTM is a team sport like any other. Now I’ll say something about our pit stops. It obviously doesn’t look good when a pit stop goes wrong, and unfortunately that’s been happening to us too often recently. What I find unacceptable is that people have a go at the crew on social networks, especially when it’s clear that we didn’t lose the race on Sunday in the pits but because we simply did not have the pace of the two Audis. The whole team is practising really hard, and everyone is doing their best. What they need now is the support of our fans. We as a team are definitely behind them.

What are your expectations for Hockenheim?
Ulrich Fritz: That we will once again be looking to our strengths and shaking off negative vibes. Apart from that, we will continue to be focused on our work as before. We want to pull off the treble – and that includes the drivers’ title. There can be no doubting our intentions.